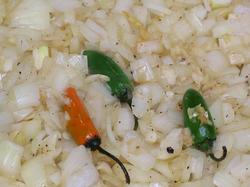 Once in a great while I will follow a recipe. Usually I find myself flipping though maybe a half dozen and seeing what I like and don’t on each one. So far, I’ve done very well this way. For whatever reason this last Sunday foodtv dot com had just what I thought I wanted. Sure it made enough for 20 servings, but I was feeling up to the task and went shopping first thing in the a.m. And true to my way of shopping it took no less than 3 grocery stores to render what I needed, mostly because it was 9:15 Sunday morning. I was on a mission.

I will post the recipe at the end. It’s painfully simple and I only did a few things differently. 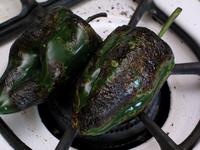 I wasn’t able to locate the Poblano chili peppers, so I used Pasilla. Once I got home I flipped through a few colorful ingredient books but wasn’t able to find out what they look like. Sure I have an idea, but I wanted to know EXACTLY what the difference between the two was. Since I was using another chili I wanted to know if one was smaller than the other so I didn’t add too much of the Pasilla. Ah heck, couldn’t find it so I went with 8 Pasillas. Here you see roasting them over the gas range. The recipe didn’t mention it, but the skins don’t digest well. Scraping them off after roasting is really easy and gives the pepper a nice roasted flavor. Don’t forget to roast the hot peppers too. I had plenty of Serranos on hand and that is what I used. I believe only 3 made it in and the dish was plenty hot.
Then I chopped up the Onion, Bell Pepper, and Garlic. I used twice the amount of garlic, at least.
I don’t know why, but I weighed out the Tomatillos (I’m not usually that snippy about amounts, but after all, it was what the recipe called for), husked them and washed then dried them. Why dry? Because I roasted them until blacky juicy under the broiler and residual water makes the little globes all splotchy.
Sure I didn’t need the chilies and tomatillos until later, but I felt that if I could get the roasting & chopping out of the way … then the messing with the 6 lbs of pork shoulder would be a cleaner easier way to go. You do what you wish. 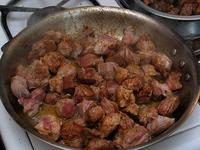 I purchased a boston butt with bone in. But I suppose it doesn’t matter because I cut out the bone when I got home. This is where a nice sharp knife really comes in handy. The meat is a bit unwieldy given the high fat content and the shear size of the damned thing. One could put it in the freezer for 30 minutes to stiffen it up, but I didn’t want to bother. I like sharpening my knives. Yes, I browned the meat in real home made lard. And I put a spicy dry rub on as well.
And that was pretty much that. Follow the short recipe and you’ll do fine. The results were outstanding. I’m convinced I could have charged the 16 dollars a pint that Pepito’s charged me a few years back.
Recipe www.foodtv.com – searched for chili verde (searching for chile verde resulted in different results)
6 pounds lean pork
1/4 cup vegetable oil or lard
2 large yellow onions, chopped
6 large cloves garlic, minced
1 tablespoon sea salt
Freshly ground black pepper, to taste
1 tablespoon cumin
8 medium poblano chiles, seeded and chopped
4 large jalapenos, seeded and minced
2 large yellow bell peppers, seeded and chopped
4 1/2 quarts chicken stock
3 pounds fresh tomatillos, husks removed
1 bunch cilantro leaves, chopped
Trim off any excess fat from the pork and cut into 2 inch squares. In a large (6 to 8 quart) stock pot, over a high heat, sear the pork in the vegetable oil until golden brown. Remove the pork from the pot and pour off any oil or fat drippings, but leave 2 tablespoons of oil. In the same pot, over a medium heat, add the chopped onion, garlic, salt, and pepper and saute until transparent. Add the cumin, pork, and chicken stock, and cook for 1/2 hour.
Add the poblanos, jalapenos, and bell peppers. Puree the tomatillos and cilantro in a blender. Add them to the pot and cook an additional 30 to 45 minutes. Serve with white beans and rice. Garnish with grated sharp white cheddar cheese. 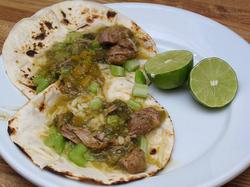