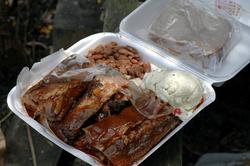 Ever have one of those days you find yourself running maybe five to six million errands? Today was one of those, zippy yet you never really get anywhere. One of those errands took me past Jones’ BBQ on San Pablo Dam Road in El Sobrante. I’m almost glad I took the time to stop.

Jones’ is in one of those new little malls where stores really have no identity, which is fine for some places. I would think anything worth noting would attempt to find some place unique. Maybe these days with so many people and so few places to build, you take what you can.
I parked easily enough and went in, the door was open. I was greated with smiles all coming from hard working people that were moving about the open (and clean) kitchen with a purpose. I notice these things and it makes me feel better. There have been a few places recently where you have 5 meandering people in the kitchen and it takes them 35 minutes to make a carne asada taco, no kidding. Moms came out to take my order and the woman running the back over heard me and had my meal half put together before Moms got the paperwork done. I ordered ribs, beans & rice with potato salad. It was 12.95 for my Rib dinner, about what I expected. I was handed my package and it weighed nearly a ton, maybe a bit less.
One of the tough things writing & taking pictures of food is that you have to WAIT to eat. Which means I had to drive from El Sobrante back in to Richmond, set up my camera and take pictures before I could EAT MY LUNCH.
All went well and in about 25 minutes I was at my desk with my hands about the styrofoam package. I opened it up, it was PACKED tight with food, every inch filled to capacity. I noticed they put a wrapper paper in and around the ribs/sauce. This way your sides and bread and utensils and napkin didn’t get sauced, just the ribs. They really took their time putting this together, I give them a 10 on presentation and care.
First off, the beans. Before I get my taste buds blown with the meat & sauce I wanted to know what the side really tasted like. The beans & rice were really good. A meal within themselves. Not overly rich or salty. A nice firm yet simmered bean with enough juice to soak the rice nicely. The beans got a two thumbs up. Then I scratched at the potato salad, not bad. But I noticed they tasted more like fancy mashed potatoes. At least it was real and got better when dipped in the somewhat sweet yet tangy BBQ sauce. Which brings me to the sauce, it was a light sauce, not opaque and heavy. A medium red hue with a sweet touch, then tangy. Just enough balance of both and worked fine for me.
After trying the two sides (I finished the beans & rice) I peered at the meat to see what I had and what was first. The ribs were layed with care and packed with care and I have to say to the ceiling of the package, this most certainly is a dinner plate. About halfway through the first rib I noticed the meat was cooked the way it was supposed to. It fell off the bone only when tugged on. You don’t want it to just fall off by itself, nor do you want to have to leave any meat behind on the bone. The meat wants to be tender, yet not mushy. This was all that and lacking something. Something … like smokey flavor. The ribs from top to bottom were totally lacking in smokey flavor. At first I was really surprised, I mean, damn after all this great care and cool digs they fall short on smokey flavor? For shame. But then I had a thought, maybe it wasn’t there fault. After all, this is the land of gas grills and Hummers. Maybe this is what people want now, that good ol’ propane flavor! Something grampa used to talk about, eh?
I ate most of the meat, it wasn’t bad per se. Besides, I was really hungry and the sauce helped a lot.
I finished, cleaned my face, fingers, desk and floor. 30 minutes later I noticed a black pepper taste/heat burn. I know cayenne and pepper flake ‘hot’, this wasn’t it. I was getting an aftertaste of black pepper and a lot of it. I didn’t notice anything while I was eating. So I went back to my leftovers to see if I could find the culprit. Sure enough, I found a rib without much sauce and found the ‘rub’ had been mostly black pepper. Initially I didn’t notice it, but after a while it was all I could taste.
If you’ve read any of my last reviews of local eateries, you know I really like to like my food & place. I’m really struggling here because on the one hand they really worked hard to get me this. And on the other, having a BBQ place with no smokey flavor really kinda says it all. At least for the ribs anyway.
I will be going back because they really advertise Fish & Chicken BBQ. Plus they have Fried Chicken. Maybe I should eat something they don’t have to ‘smoke’. I will go back and I will have Fried Chicken and then I will try their Fried Red Snapper dinner. I always try to give a place 3 rounds before I dub them Nitwits.
Before I sign off, it says here on their menu they have Chicken & Sausage Gumbo, could be interesting. Plus they have blackened shrimp/chicken/steak on a bun. So you see, there is more to try here. We have one strike, let’s see if we can’t get some runs batted in.
Xo Xo