I’m not sure what inspired me to put together a ‘scalloped’ potato dish on a work day with not more than an hour and a half for prep and cook time. I know I know, “hey bone, scalloped potatoes aren’t that tough.” Yeah well, I added extra goodies and had to move pretty darned quick to get this on the table before everyone filled up on peanut butter & crackers. Keep in mind too that I have to take decent pictures and make mental notes along with everything else. Boy did my hard work pay off big time.
This dish was succulent, rich, savory & worth every bead of sweat.
Most of the ingredients make sense, onions, parsely, mushrooms, apple wood smoked bacon and fresh herbies. I decided to render up some pancetta to take it over the top. Yum. 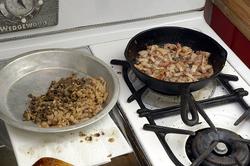 I sliced the bacon & pancetta real thin and rendered it down a bit, not crunchy.
You should also saute up the mushrooms, season them with extra virgin olive oil, salt & pepper. Leave the onions raw, I like the bright flavor.
Keep the ingredients separate so when you assemble the beast you can add a bit to each layer. 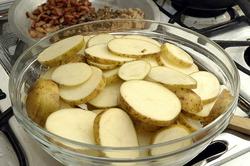 Oh yeah, before you start slicing & rendering your goodies, put a large pot of water on to boil. You’re going to parboil the taters first. Pull out & wash maybe 6-8 good sized russet potatoes. Slice fairly thinly, evenly (cook at the same time don’t ya know). When the water is boiling, toss in your taters for 8 minutes. Drain.
When you get a chance, get out your cassarole tray. Rub the inside with oil, or
lard or duck fat. Duck fat would be tremendous! 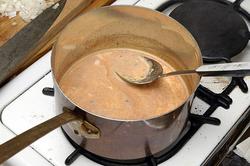 Measure out 1 1/2 cups of milk, hopefully whole milk. All I had on hand was 2%, it does fine just add extra butter later on. Here’s where you get to make your sauce/gravy/juice! I tossed in some Tony Chacares Cajun Seasoning (really salty) and some fresh thyme. Get this nice and toasty warm, don’t boil the milk though.
You can do so much with the mixture at this point. Or leave it alone, it is up to you. Add the flavors that you like, herbs or more mushrooms or sundried tomatoes. You get the idea. 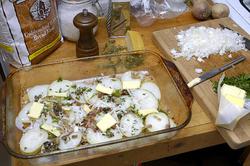 So far you’ve parboiled the taters, drained and are resting. You’ve diced up nicely your ingredients and set aside. The bacon & pancetta & mushrooms have been sauteed and are glistening. Your fresh thyme or rosemary is sliced fine.
Dig out some hard parmesan like cheese and something to grate it with. Heck, while you’re at it bring out cheese that’s a bit softer and creamy like too. Oh, and don’t forget the butter. Don’t use margarine. Don’t.
Start assembling your dish with a layer of sliced potatoes first, in the pre-oiled pan. Take a little bit of everything and start layering it in. On the top of each pile, grate in a bit of cheese. Not too much, this isn’t Cheasey Pleasey. Pay attention to the corners too, every layer needs love. Cut yourself some pats of butter and layer them in as well. I did a layer on the bottom, skipped a layer, then did another. That seemed enough of the butter. Surely if butter calls to you, add more. But you do need some butter, it helps deliver the flavor of the herbs, mushroom and so forth.
Keep an eye on your piles of ingredients, the game is to get them even on each layer and not run out. Nor do you want to have anything left over.
When you get to the last one, with just bare potatoes on the top, pour GENTLY the milk over all. THEN layer on your last layer of goodies with again, cheese on top (ever so lightly).
note: if you choose to add bacon & pancetta or similar, don’t salt the dish before cooking. 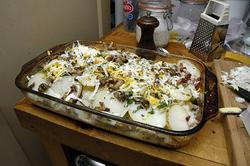 Pop in to a 350 degree oven one rung up from the bottom for about 40 minutes. Keep an eye on it, you want the top browned and don’t want to boil it bone dry of milk sauce. Let it sit for at least 10 to 15 minutes without a foil tent. This sucker is hot and you don’t want to hurt your family with molten food.
I absolutely LOVED this one. Rich tasty love. I’ve tried making it without meat/bacon and it just doesn’t work, blah food. If you add the salty love meats, then you’ll most assuredly have success.
This dish reheats excellently, it lasted for a few days and tasted fine on the last day.
Xo Xo