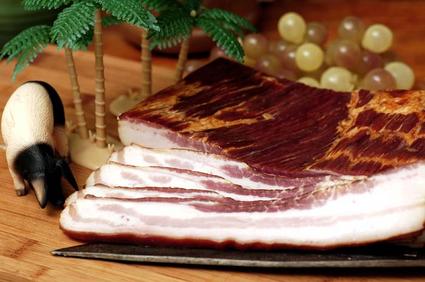 8:30am this bright Sunday morning found the Biggles with eyes open, yet still on the foggy side of awake. A moment later the throaty snarl of Black Bart making tracks away from Meathenge Labs at breakneck speed reminded me of my porky gift to be.
Yup, Chilebrown has struck again. Along with the Sunday paper, a pound and a half of slab bacon was resting gently. Moments later found our plucky hero with camera in hand and a 12″ cast iron pan on the warm.
Slice the bacon Biggles !!!

It all started out on the straight and narrow. CB and his wife Ms. Goofy had tickets to see Elton John in Las Vegas. Since they were driving, stop by some smokehouses on the way. Well, they made it down there easy enough, but while dining on a fine meal the waiter informed them the concert had been cancelled. The box office wasn’t any help either, were told that they’d notified 95% of the ticket holders. Suppose our Bacon Heros were among the unhappy few. Mad, pissed off and upset they beat a hasty retreat from the adult playground headed for Gustine California.
There was another smokehouse on the list, but when they arrived it had closed down. The sign was still up, but they was gone. Check the comments, CB will give us the low down.
My first question was, “Where the hell is Gustine?” I ran to google earth and it’s way out in the California central valley, way out there. Not a quick trip from the San Francisco Bay Area, no sir.
As you saw in the first image, I sliced a few to sizzle. This version has the rind on, not too thick though. It smells clean & fresh with a gentle smoky goodness. For this trip I decided to do a slow browning with the press. Bring it to a gentle crispness so the rind would pop ever so gently. 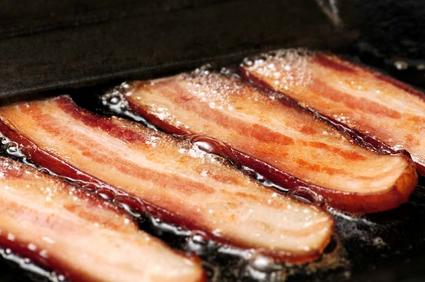 It rendered down nicely and gave a soft, sweet aroma to the room. I flipped it a few times, moved the press around to make things even. No sticky residue from the cure in the pan. This isn’t a good thing or bad, just something to take note of. Remove from pan and pat dry with a paper towel. Man, cooked to perfection. Got some chewy action and the rind popped. The fat had texture, smoonch. Clearly a good piece of belly. Very meaty, excellent texture.
The beginning flavors were very mild, low smoke, low cure. The finish was the same, very mild and clean. While this bacon is most certainly a good contender, I’d like to see more smoke & cure flavors in there. It seems a little 2 dimensional.
CB’s comment was that he’d found a gold mine. After perusing their flyer I think he’s right. They sport over 60 kinds of sausages both smoked & cured. All spice blends were developed on site and on Saturday they have barbecue take-out. The best part though? Under the Fresh Sausage heading they tell how they’re fresh and need to be baked, fried, steamed, barbecued or broiled. Then right below that, on one line, centered is the sentance, “We do not recommend the microwave.” YEAH !!!
So, if you’re passing through the area or even remotely close, make a point of stopping by to visit Wolfsen’s. I know I will.
Biggles
Wolfsen’s Meat & Sausage
358 South Avenue
Gustine, CA 95322
209.854.6456