I found the pitchers! 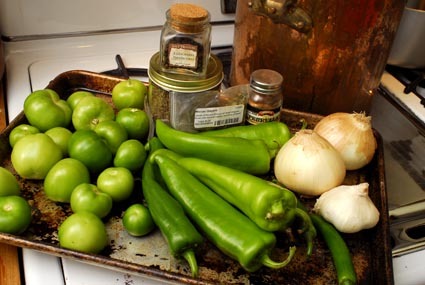 This isn’t necessarily an exact recipe, this time. This batch was something I did on the spur of the moment, not sure what happened really. I was doing my weekly shopping (fer kid’s lunches and junk) and walked passsed the chile peppers and thought to myself, CHILE VERDE. It was just like that too, chile verde. If you’d like a more exacting recipe, try my Pork Chili recipe. In any case, come along for some stewing fun, eh?

I love to play with my food. Which is why I’m probably more likely to cook this after work then I am to pan sear salmon or a salad. Playing with salad is just plain sad. Playing with pork and chile peppers? Now that’s a party!
Here’s who I bring to my party.
3 pounds of pork shoulder or sirloin of the same – Cube it
5 or 6 poblano chilies
2 small yellow or 1 large white or whatever – Dice it
1 head of firm & happy garlic – Smoosh mince
1 heaping teaspoonful of good salt (or none, you make the call)
2 teaspoonfuls toasted cumin seeds, then grind to powder
2+ fresh, hot chile peppers – You decide
enough chicken stock, mebbe a quart or so
1.5 to 2 pounds fresh tomatillos
cilantro to finish, if you like
Before you do anything you need to broil the tomatillos until they’re pretty. Remove the husks and rinse before you broil, foo. 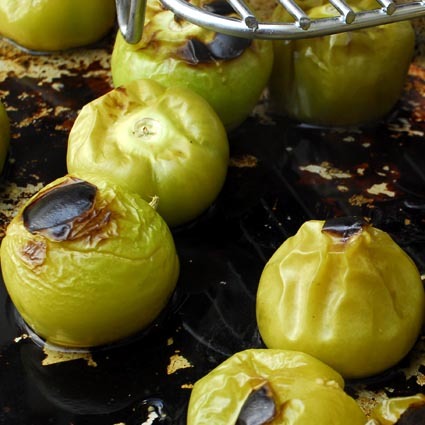 See? While they’re doing their thing, fire roast the peppers. Once they’re all black and happy, toss in to paper bag for 10 minutes. 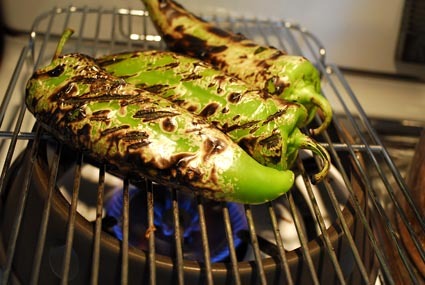 Scrape off the skin, do not do this with water. No washy away tasties, get it? Cut stem and remove seeds. Dice ’em up.
Whiz the roasted tomatillos just a bit in a blender or food processor, all mooshy.
Since this was a weekday meal, cook one night and eat the next. I didn’t bother carefully browning the meat & onions & garlic. Keeripes, it’s going to simmer for hours, who cares? I know ol’ CB cares, he wins chili contests.
I’m going to make this REALLY easy on you.
Get a huge pot and throw everything in there at once and cook it. 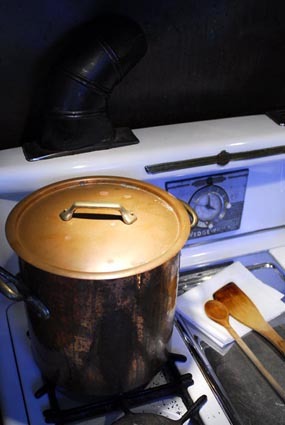 Simmer until its done or your ready to eat, this is 2, 3+ hours.

Mine was too liquidy, didn’t pull the lid off soon enough. So, I transferred to a short, wider dutch oven and reduced until I liked the consistency. Plus, chile peppers were too light. What I mean is, the grocery store’s poblanos were all wrinkly, so I bought some New Mexican rigs. As you can see in the meez image, they’re really light green. So, next time I’ll make sure I get the poblanos. That being said, the finished product was outfrickenstanding. 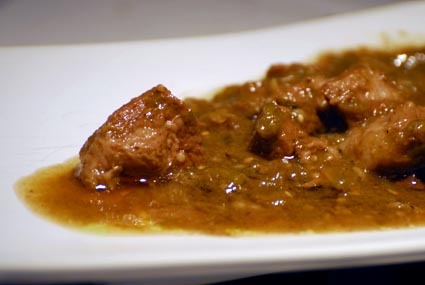 Friend & co-worker said it was the best she’d had. She knows how to cook too. As far as pairing it with something? Try a ladle and a cold beer.
Cheers