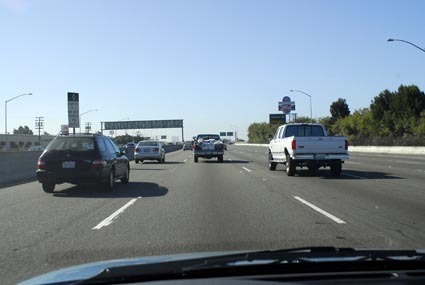 Who the hell is Ted? And what the heck are you talking about Biggles? Whoa there Tex, hang on. Ted is Highland Hills Farm and rancher extraordinaire. To say he’s a local character to our farmer’s markets here would be a small understatement. I remember working the Fatted Calf one fine morning and overheared Ted telling a customer in a certain tone after said customer asked for directions for cooking, “I’m a rancher, not a chef!” And that, pretty much handled that.
Being who I am, have always been impressed with his “ranchin’ truck”. A Ford 3/4 ton rig with dents, dings, mud, dirt, dust, scratches and now a missing tailgate. That and a permanent collection of random hay pieces that fly out the back at any given moment. Well, I’m not quite sure why or how the planets align with him, but for me and a few others, he’s spotted more about town than anyone we know.
The picture above was taken way back on September 1st at about 9:45 am, west bound on I-80.
I saw his truck again this last Monday at 11:22am, parked on Dwight Way heading east near San Pablo avenue. Quite a few bales of hay, a gaggle of humongous coolers (full of meat no doubt) and a piece of twine holding this all in the bed (no tailgate, remember?).
Here is Jlee’s report:

A couple of weeks ago, driving west on I80 around El Cerrito, there was a sudden “hay storm”. Enough hay blowing around to actually have to close my window. I’m thinkin maybe a horse trailer up ahead, some guy going to the race track. I get over to the next lane, speed up to pass it to avoid the chaff. Then just coming up to Albany, I see the offender. A turquoise pickup, beat-to-shit, spewing hay. And then I know. Oh right. It’s Ted. Of course.

So, as you can clearly see, Where’s Ted is going to be very exciting. Please stay tuned for the next, Sighting of Ted!
Biggles

8 thoughts on “Where’s Ted? – 1st in a series in which we experience a Sighting of Ted”