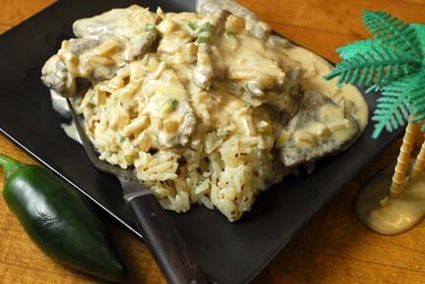 Roll that n baby! Stick out your chest and raise your arms as you say it.
Beef Stroganoff El Salvadoreño !!!
First thought, jacked a setting on the camera and didn’t catch it. They dark. Flitting the levels didn’t even do it, feh.
Okay, so here’s the scoop. I haven’t made Beef Stroganoff in more than 20 years, not sure why. I think it’s my general aversion to sour cream, it’s like butter. It scares me, no really. But in the last week, have been craving it. Craving it enough to actually shop for the ingredients and make it. So, Friday afternoon at 5pm we find Biggles at the local Dumb Mart looking for parking …

… and it’s looking scarce. I’m 1 in about a line of 6 vehicles filing in. Gee, 5 O’ Clock on a Friday and they’re busy? What the hell was I thinking? Sigh, drive right back out. I ain’t dealing with that mass, no way Jose.
Off to my favorite El Salvadorean market, Joya de Ceren. It’s my number 1 because of Omar, he just plain, flat out rocks. Omar works 7 days a week and always has nice words for every customer, candy for the kidlets and stories to tell. If he isn’t there, I leave my card so he knows I’m about.
I don’t know if you’re thinking what I was thinking, but getting the ingredients for Beef Stroganoff at a Latin market may or may not be exactly comparable. We’ll have to see, eh?
My inspiration, as with many recipes, comes from Elise. I did a google and she came right up with this recipe for Beef Stroganoff. Her list is what I walked in to the market with, but didn’t necessarily walk out with. But I believe she’d be okay with that. Elise has been by the Labs here a few times to break bread. She knows the magic of, Meathenge Labs.
First off, the meat. We needed beef that was going to be tender when gently browned in butter. I asked for such an item and was given Palomilla. Omar knows his stuff cause Palomilla is top sirloin! And, as all the Latino markets around here, they freeze their hunks of meat. This way they can cut wafer thin slices, perfection. Then, I needed sour cream. Hmmm, crema! He has both the Mexican crema and the El Salvadorean crema, guess which one I chose? Apparently the El Salvadorean version is a little more sour, yay!
Ack, no fresh mushrooms. Oh my, what to replace mushrooms with? For a Latin beef stroganoff? Jalapenos! Made sense to me. No pasta either, but rice would suffice. I was on my way, smiling from ear to ear.
Here’s what I used for ingredients:
Butter – Lotsa
Top Sirloin – 1 to 1.5 pounds worf
Onions – 1/2 cup finely diced
Jalapeno Peppers – 1 but could have used 2 or 3. The pepper mellowed with cooking
s&p
Crema – 1 huge cuppa
Broff – Beef broth to bring consistency where I wanted it
Wine – would like to try some white wine in the next batch 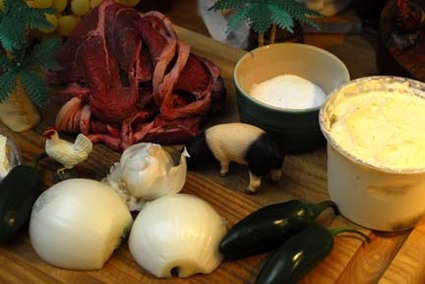 Elise’s recipe rules, print it out and use it. Brown stuff separately, starting with the meat. Use butter for this browning and add crema at the end. Do not simmer with crema or it’ll break. At some point would like to use creme fraiche, it can simmer!
For the rice, I used medium grained white rice. Cooked it with chicken broth and a teaspoon of cumin seeds. I actually finished the entire cooker of rice myself, it was that good. 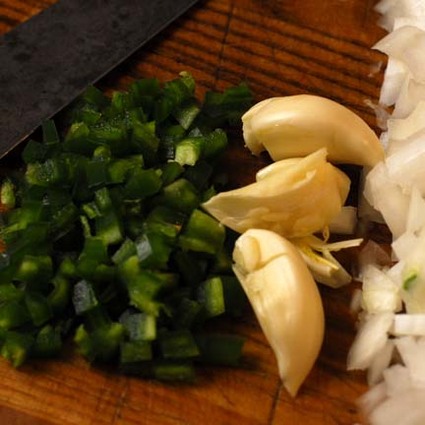 What started out as an odd change in direction was absolutely amazing. It was stick your face in it great. There are so many variations this food can take, it staggers the mind. And I have to say brother, or sister, I do staggering very well. Try it, do it and add more fresh chile peppers. I know I will, maybe tonight.
xo, Biggles