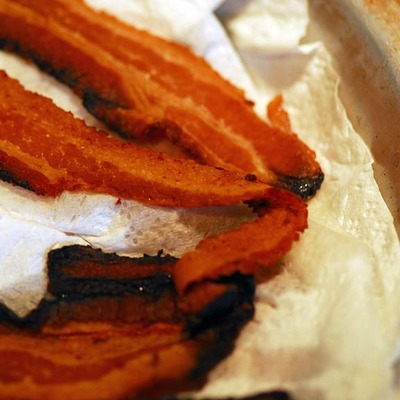 Dang, where’d that week go? Yeah, I dunno either. I haven’t spent much time in the kitchen, nor at the grill. Sure tore it up last weekend though! Here’s Saturday at Chilebrown’s celebrating his new sauce, The Good Reverend Dr. Biggles’ Bucktooth Revenge BBQ sauce.
Oddly enough, I meant to stop by last Friday too. Creepy E gifted me an older electric skillet and I did up some pork chops! Here’s last week’s Friday in Meat that you never saw.
And, to make the pot that much sweeter, this just in from a Meathenge fan, Snowbuggie.
The Pig
In England once there lived a big
And wonderfully clever pig.
To everybody it was plain
That Piggy had a massive brain.
He worked out sums inside his head,
There was no book he hadn’t read.
He knew what made an airplane fly,
He knew how engines worked and why.
He knew all this, but in the end
One question drove him round the bend:
He simply couldn’t puzzle out
What LIFE was really all about.
What was the reason for his birth?
Why was he placed upon this earth?
His giant brain went round and round.
Alas, no answer could be found.
Till suddenly one wondrous night.
All in a flash he saw the light.
He jumped up like a ballet dancer
And yelled, “By gum, I’ve got the answer!”
“They want my bacon slice by slice
“To sell at a tremendous price!
“They want my tender juicy chops
“To put in all the butcher’s shops!
“They want my pork to make a roast”
And that’s the part’ll cost the most!”
They want my sausages in strings!
“They even want my chitterlings!
“The butcher’s shop! The carving knife!
“That is the reason for my life!”
Such thoughts as these are not designed
To give a pig great piece of mind.
Next morning, in comes Farmer Bland,
A pail of pigswill in his hand,
And piggy with a mighty roar,
Bashes the farmer to the floor…
Now comes the rather grizzly bit
So let’s not make too much of it,
Except that you must understand
That Piggy did eat Farmer Bland,
He ate him up from head to toe,
Chewing the pieces nice and slow.
It took an hour to reach the feet,
Because there was so much to eat,
And when he finished, Pig, of course,
Felt absolutely no remorse.
Slowly he scratched his brainy head
And with a little smile he said,
“I had a fairly powerful hunch
“That he might have me for his lunch.
“And so, because I feared the worst,
“I thought I’d better eat him first.”
The Pig by Roald Dahl
xo, Biggles

7 thoughts on “Your friend in meat, happy friday everyone!”