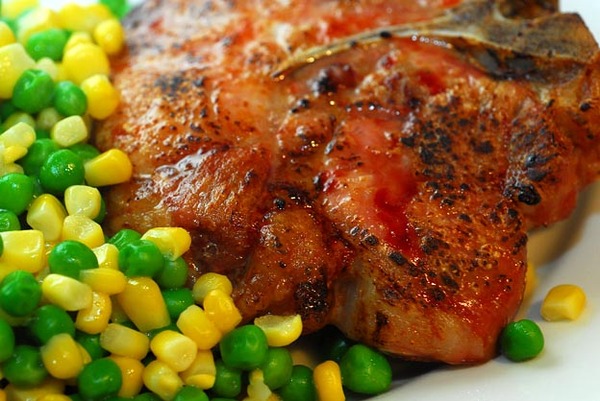 Was pretty much cooking for myself last night, Tiny E’s consumption of food really doesn’t amount to what most of us call a meal. I had time, I had pork chops and if I ruined them it wouldn’t ruin anyone’s evening. I wondered what it’d be like to put the center cut chops in to the oven at 250 degrees until they reach 190 degrees (pully aparty).
I used a glass casserole dish with a chrome rack installed, this would keep the meat up and out with the heat able to get all around. Marinated with kosher salt, preheat oven to 250 degrees.
2 hours later, at 190 degrees internal temperature I had a real piece of shit for dinner. The loin portion of the chop didn’t have enough fat to keep it moist. While I had no temperature spikes, the fat was gone! And, considering the method used, there was no browning, no flavors. It was dry, flat tasting pork that just didn’t deliver.
“But Biggles! I see browning !!!” says you. Heh, just because I ruined dinner doesn’t mean I didn’t have fun. I grabbed the propane torch and browned it myself!
It looks a heck of a lot better than it was. Don’t do it.
Biggles