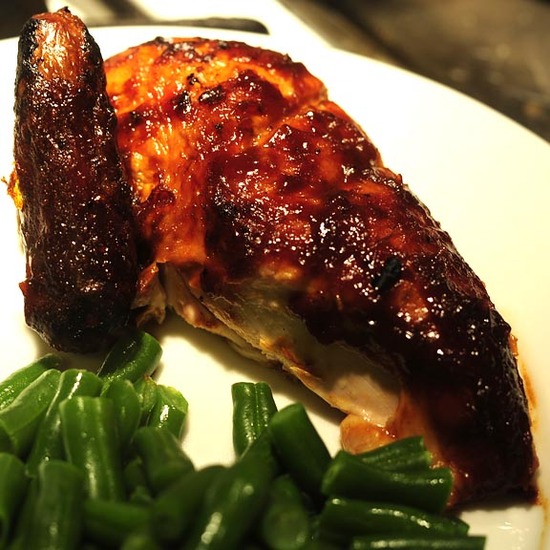 And, Dang. I know it’s been a while, but dang. A few moments ago was cleaning out the folders on my desktop and ran across a few pictures I’d taken a few months ago for a post. Yet another meal that lingered, then fell by the wayside. It took me nearly 5 minutes to sit with the pictures and the name of the jpg before I could remember anything about the meal. Shake those cobby webs Biggles!
Chilebrown of Mad Meat Genius gifted me a bottle of Kansas City Cowtown BBQ Sauce, and apparently I smoked a chicken, then glazed the sucker with the sauce. See? 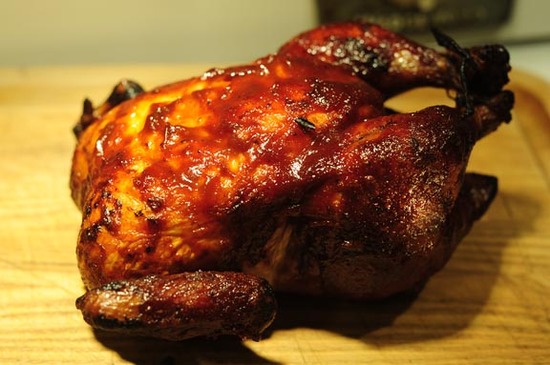 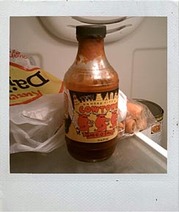 Um, I don’t think ol’ CB knew what he gave away. Or maybe he did realize the gift he gave me and I apologize for it taking me 2 months to post about it. But this BBQ sauce is hands down, among some of the best bottled BBQ sauces I’ve ever had. Heck, it’s a better BBQ sauce when compared to some of the ones I’ve made or been served over the years. The damned stuff is really good, tangy with a finish of sweet, smoky goodness and thick enough to stay put. Sure there are the purists and the elitists who won’t do sauce, but sometimes sauce is good. Sometimes I like having sauce with my smoked goodies and if and when I decide it’s time for sauce, dangit, I’m going to have some sauce! Even makes an impression 2 months later.
Hmmm, or maybe it could very well be that I only had a bowl of cereal for dinner and I’m hungry. Either way, if you see this sauce on a shelf or online somewheres, it’s Meathenge Approved. Hungry or no, it’s a solid contender.
xo, Biggles