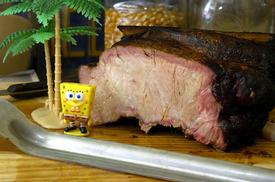 This last weekend has to have been one of the most exciting weekends in quite some time. Both Saturday & Sunday was filled with shopping, preparing, experimenting & cooking/smoking/roasting meat. There will be a lot of information both informative & fun over the next few days, so please keep yourself propped upright long enough to get through it, K?
The catalyst for the last few days was the arrival of the La Caja China Roasting Box. I purchased it a few weeks ago, maybe 3. I had planned on roasting a pig for my birthday party that’s coming up, but realized it was too much too late. I attempted to cancel the order, but it showed up anyway. Fine, I’ll find a use for it.
I figure I can do up some turkeys, that’s straight forward enough. One of my first rules about cooking for a party is to not do something for the first time that day. This means I have to learn how to inject meat with a marinade (no, I haven’t been through that yet) and make a few runs through the roasting box before the following weekend. I can do that. But first I wanted to try out my personal injection technique & recipes before ruining 2 14lb natural turkeys. Which means today we’re going to figger out how to inject a marinade in to a Boston Butt Pork Roast. Baby Steps.

I spent some time online searching for marinades to inject & techniques with the same. Turns out everyone has an opinion as to whether injecting works. Whether cheap syringes work as well as the 35 dollar rigs, whether to use butter or a more saline related juice or a brining solution.
First off, injection works and if you haven’t tried it, do. Second, the solution MUST not contain bits of any size. The needle gets clogged quite easily, so run the liquid you use through a fine sieve first. 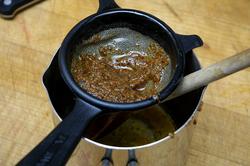 Since I’m a fan of the Extra Virgin Olive Oil, I used this as my base. Instead of torturing myself over the spice/herb concoction I used a few tablespoons of Tony Chacere’s Creole Seasoning in the half cup of oil. Warm ever so slightly and dissolve as best you can. I then tossed in a few galooshes of cider vinegar, what the heck eh? Sounds like a spicey salad dressing, don’t it? 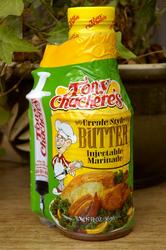 Or buy a marinade made for injection. I found the syringe included in this package very satisfactory, it had holes on the right & left of the needle tip. Whereas the syringe included in the China Roasting Box seemed cheaper and a more standard tipped needle. I found both types of tips worked well, although the one with holes on either side tended to inject more solution and make the meat puff up, neat. If your solution tends to be a little thick, warm it a bit. Not hot, but nicely warm, it’ll flow a bit easier.
I found Tony Chacere’s Butter Injectable Marinade really nasty. I don’t appreciate fake butter flavorings, period. Keep in mind though, the other 3 tasters liked it just fine. You decide. 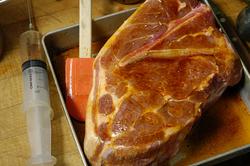 One wants to inject along with the grain of the meat, parallel with the muscle. Stick the needle down in far, apply pressure to the plunger and remove slowly leaving marinade all along the injection route. Attempt to slow plunger pressure as you come to the surface so the meat can close up behind the needle leaving the marinade inside the meat. My marinade was too damned thick and it was spewing constantly, so I just poked and poked and poked and poked. See if you can do this ahead of time about an hour or so and let the roast come to room temperature before you smoke/roast/grill the beast.

This roast you see was smoked in hickory for maybe 5 hours or so. It was crazy tender juicy. I can see after doing this a few times, you really want a marinade that is higly salty, saltier than normal I would go for.
Okay okay, here is a little preview of the China box …