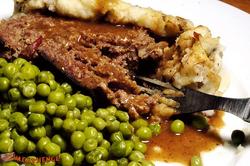 A month ago I was perusing a 1965 Family Circle magazine and ran across a full page ad for Campbells Soup, some recipes too. One recipe was some kind of a meat loaf cooked in a bundt cake pan, covered in Cheddar Cheese Soup & bacon. They called it Crowning Glory. It scared me. The next recipe was a mini meat loaf & traditional American spaghetti with a red sauce. Looks like a gut glump to me. However, the featured recipe was a meat loaf slathered with creamy mashed potatoes and a gravy (yes, made from Campbells soup) over all. This I could do, after all, Comfort Food is what I’m all about. So when Moira from Who Wants Seconds? offered up a contest for a making of some “Comfort Food”, I knew what I had to do. I was on a mission.

I know this sounds odd, but I’ve never been impressed with my own meatloaf makings, at least for the last 11 years. I believe, mostly because my ingredients & portions are controlled by my children’s palate. Tiny E won’t do Salt. I can’t add too much bread crumbs because Z doesn’t like his meat “spongy”. So I decided to use a recipe that Nic from Baking Sheet submitted for Meathenge’s Meat Platter Contest. Armed with a few recipes and a really good reason, I was ready. Besides, the submission is due today. 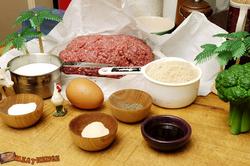 Here’s the recipe:
Nicole’s Meatloaf Recipe
1 1/4 lbs lean ground beef
1 cup fresh bread crumbs (1 or 1 1/2 slices)
1 egg
1/2 cup milk
1/2 medium onion, minced
1 1/2 tsp salt
1 tsp pepper
1 tsp garlic powder
1/4 tsp dried mustard (optional)
1 tsp worcestershire sauce
Preheat oven to 375F. Line a baking sheet with foil
Combine all ingredients in a large bowl and mix briefly, but throughly, with your hands.
Form meat mixture into a loaf shape on baking sheet.
Bake for 45-50 minutes.
—————————————-
I got my meez together, let the meat & egg come to nearly room temp. Ya don’t want yer proteins all seized up. Everything came together just fine. I wasn’t able to use garlic powder, just can’t do it. I find it bitter and stays in your mouth for hours after a meal. I substituted Onion Powder, worked fine.
At this point find yourself a load of potatoes. 3 pounds at least, 4 if you love the spud. Washem’ good and set aside. Get your large boiling pot and fill with cold water, get that to nearly boiling. This way you’ll be ready to go when the meat loaf is nearly done. Put a lid on and let it sit. 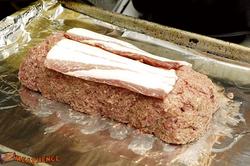 I used a cookie tray covered with foil to form the loaf, worked nice. As I was finishing up, I noticed the top of the loaf looked lonely. It needed a friend, a bacon friend. On went the Niman bacon.
It was at this point I figured, since we were to have meat & potatoes (best Comfort Food ever), we were going to need a pan gravy. I looked at the cookie sheet, looked at the foil and decided this was not a good thing to make gravy in.
I wanted all those bits too, nothing left out. 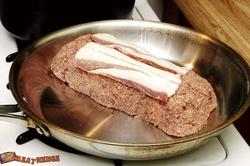 So I transferred the sucker to a fry pan. I tried to fit it in to my largest cast iron skillet, but it was too long. So this stainless rig would have to do. When I do this again, I’ll make the loaf to fit the cast iron skillet. The stainless pan transferred too much heat and put a tough skin on the bottom of the loaf. Which I and my wife enjoyed, but still. It shouldn’t have been there.
Put your spuds in the warm water and jack the heat 25 minutes before the loaf is due to come out of the oven. Letting mashed taters sit around makes nasty paste. Fresh is the way.
Ya know, what you could do. Instead of pre-heating the water, just fill the pot with cold water and place your spuds in there to wait their turn. Supposedly you get better flavor by bringing the water to temp along with the taters. Peel or not, it’s up to you. I like them both ways. 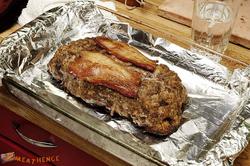 Remember to click on the image if you’d like a larger & easier to see version.
Yup, in 50 minutes look what we have! If you’ve timed it right, you’re pulling the meat just as you pour most of the tater water out. I say most, because it would be nice to retain a cup or two. Tater water is good stuff. All ya’lls should already know how to make mashed taters, do it and make plenty.
Yank up the oven heat to 450F. 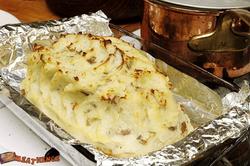 I used a long pastry knife to make the mashed potatoes look nice, maybe an inch thick. As you can see I moved the loaf back on to the cookie sheet with foil, made it a lot easier to manipulate the creamy taters. I used a can of spray type oil to light cover the taters, gotta get them to crisp up.
Pop it back in to the very hot oven for another 15 minutes.
Since the meat loaf is out of the fry pan, you can now make the gravy while the loaf is resting. I poured out all but about 1 TBS of fat, then added a dollup of fresh rendered lard. I just don’t like ground beef fat to make gravy with, sorry. Get that hot over medium heat and add a whole minced shallot along with a handful or two of minced mushrooms. Sautee until they just start to brown, scraping the pan to release the fond. Add a TBS or two or three of flour and get this all to a light paste consistency. Pour in enough Natural beef broth until you get a the ‘gravy’ consistency you enjoy. Strain this in to a waiting sauce pan and bring up temp. Add lump of butter and juice from half a fresh lemon. You’re ready. OH yeah. 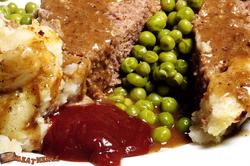 Ta da!
I was so pleased it came out this good. The meat was light, fluffy and everything anyone could want in a traditional American Meat Loaf. Plus it had the added love of being covered with fluffy, buttery mashed potatoes that had a crunchy crust! If that wasn’t enough, when sliced it gets a bath of rich beefy gravy. Couple this with a dose of ketchup and you’re set for the evening. To accompany this meal you may serve a hearty cabernet or a glass of cold whole milk. Either way, this is a meal that will bring you back to your childhood, as long as it was a good childhood. If not, enjoy the flavors and tuck your psychosis deep deep down. Where nobody can find them. It’s where I keep mines.
Xo Xo 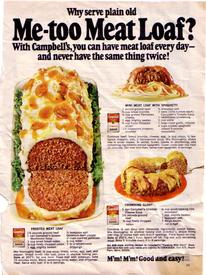 Original ad from 1965 Family Circle Magazine. Been dragging it around like a security blanket for the last month, shows it.