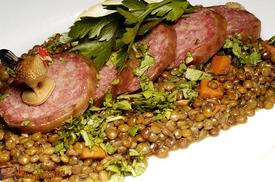 This entry came about late last week when the Fatted Calf newsletter rolled in. One of their specials for the week was a new sausage, Cotechino (kotehkeeno). I was interested to see, I wanted to know a bit more. So I did what any wild eyed hillbilly would do, google it. Here’s what I found:
“This hearty and satisfying dish is traditionally eaten on New Year’s to bring abundance and fortune. Cotechino is an Italian fresh pork sausage. It is creamy and delicate in flavor. It is sometimes sold precooked or boiled but the best ones are fresh. If you can’t find cotechino a high quality fresh pork sausage flavored with nutmeg, cloves and pepper will suffice.”
Yeah, I dunno. Boiled clove flavored meat wasn’t what I was interested in at that moment. I might try it, but surely wouldn’t enjoy it, no sir. Later on that same day, Amy stopped by and offered up a recipe she thought would get me close to how it was supposed to be. That was the inspiration I was looking for. Holy cow, I am so glad I did. This meal turned out to be one of the best meat surprises in probably 6 months or more. Meat Surprises can be a really good thing. 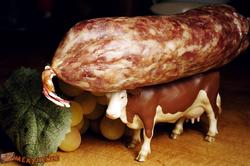 When the cows come home to Meathenge Labs they bring porks sausage!
Here’s one of the things I brought home on Saturday morning, the Cotechino. I bumped in to Sam while I was there and she suggested I step over and get some of Loulou’s Blood Orange & Rosemary Marmalade, I did. But I’ll save that for another post, hey. It tastes better than really good, just so you know. 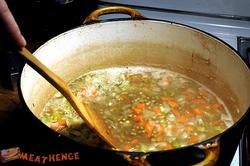 Here’s the recipe Amy sent over, Cotechino with Lentils.
Ingredients
One 1-pound cotechino, preferably uncooked
1 pound green or brown lentils, picked over & rinsed
1 carrot, finely chopped
1 medium onion, finely chopped
1 stalk celery, finely chopped
2 garlic cloves, minced
2 cups chicken broth
Salt & black pepper
In a large bowl, soak the cotechino in water to cover for 1 to 2 hours.
Place the lentils in a soaked 3-quart clay pot. Stir in the carrot, onion, celery, and garlic. Add the broth and 1 cup of water. Cover the pot and place it in a cold oven. Set the oven temperature to 450 degrees F and cook for 1 hour, until the lentils are soft but not mushy. (Check the lentils after 30 minutes, adding an additional cup of water it the liquid has dropped below the surface of the lentils.) Season with salt and pepper to taste.
Meanwhile, with a fork, pierce the cotechino in 8 to 10 places. Place the cotechino in a deep skillet and add enough water to cover. Cover the pan, bring the water to a simmer, and cook the sausage gently for 20 minutes if using cooked cotechino, 50 minutes if using uncooked.
Spoon the lentils onto a serving platter. Cut the sausage into 3/4-inch slices and arrange over the lentils.
————————————————————–
Pretty flippen’ easy, don’t you think? But I don’t have a clay pot, yet. So, I had to check cooking times with other recipes to make sure I didn’t screw anything up.
As near as I can tell, just make a pot of lentils how you like. Simple enough. 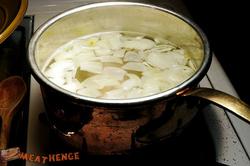 One of the recipes had you cooking the sausage in water that had onion & peppercorns in it, sounded perfect to me. I liked the idea of adding juicy flavor to an already rich sausage. This went for about 50 minutes, kinda pretty lolling about in the onions there. First smells were from the onions, nice. Then the sauage started to warm and release some juicy love. The steam from the sauce pan carried the wafts of rich sausage & onion throughout the house, we were getting there. Oh and the lentils were fine too. 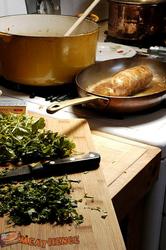 The sausage was done, mmm boiled sausage. I couldn’t stand it, so I browned it a bit. Much better. 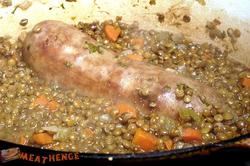 As the lentils were finishing up their business I tossed in the Cotechino, they needed to be acquainted better. It’s all about relationships with food, getting together. 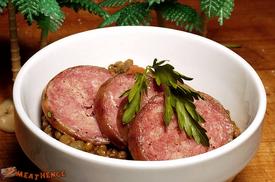 The Cotechino & Lentils meal is a perfect fit. The sausage tasted kinda like it was cured, like a salami almost. Almost. This was surely a positive attempt for Meathenge Labs. I started with apprehension and completed the recipe with a smile and full belly. Nothing finer.
Xo Xo