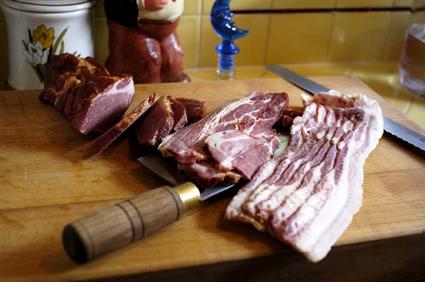 The boar bacon is the one in the center there. It isn’t a great image, I took this in someone else’s kitchen on the fly.
Given the sheer volume of bacon that Chilebrown and I have on hand, we thought maybe it would be good to sit down and have a taste. The catalyst for this particular meeting was a delivery of yet another kind of bacon, Wild Boar Bacon.
It’s just that, belly bacon taken from a wild pig. I’ve always wanted to go boar hunting with someone. George used to do that while he was still in California. I asked him about tagging along one day, I really wanted to go. He said I was welcome, but I had to have a side-arm. Those wild boards are huge and can take you down in a second. That means I had to have a good sized pistol with me, one with real bullets. There are many things I can do well and being safe with something with bullets isn’t one of them. I’d come back with a hole in my foot or without one of my digits. It doesn’t scare me, it’s just a fact. Armed with this knowledge, I let others do my wild pig killin’ for me. I needs me fangers.
The wild boar came in a slab, it needed to be sliced. The texture of this bacon was wiggly. The meat was loose, not firm like standard belly bacon. The smell was light and fresh, not heavy in cure or smoke. Not gamey. Along with the wild bacon, we did Fatted Calf’s belly bacon and Morants Canadian Bacon. 3 bacons for the 2 Meat Brothers.
Each bacon got its own pan. Since wild piggies get to run around, the bacon is quite lean with a high meat to fat ratio. We could have added a little oil to the pan. All 3 cooked up just fine. The Canadian bacon was too salty and we left it for CB’s pot of chile he was going to make that day. Fatted Calf’s bacon was a fine contender, but this was Taylor’s milder version. The smoke was light, the cure was even and the cut was a standard belly cut. There were no huge wangly country slices in there with rinds and heavy smoke action.
The boar bacon had a light smoke, light cure and had the texture of a chewy beef roast. Hence, wiggly meat. It wasn’t a bad chewy, it gave way pretty quickly. But I don’t think we expected the heavy, chewy texture of the pork belly. Both CB and I enjoyed it immensely. I would absolutely love to put slices of this in my smoker for a few hours, oh yes. All in all I’d like to see more of this Wild Boar Bacon. The possibilities for it should be quite huge. I’d like to see a far heavier smoke to it along with a cure that’s on the sweet side. Just a tad mind you, just a bit. What a way to start a Saturday morning !!!
Biggles