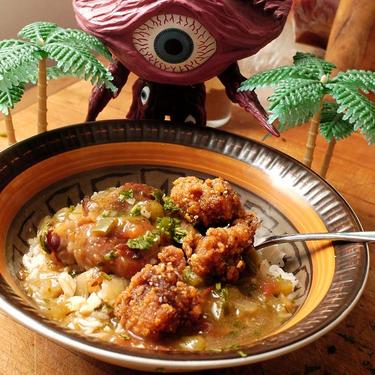 I’d never had Chinch meat, always heard about it. It wasn’t until my brother inlaw Meathead found some at a local market in the freezer section that we’d even consider it. It was decided to meet up this last Friday night and see what all the hubub is about.
Oh stop it, it’s just like squirrel or ‘possum. Let’s learn to love our furry little chinchilla for more than just the hide. Use it all, I say. Please come and join our adventure.

Let’s start with the recipe. 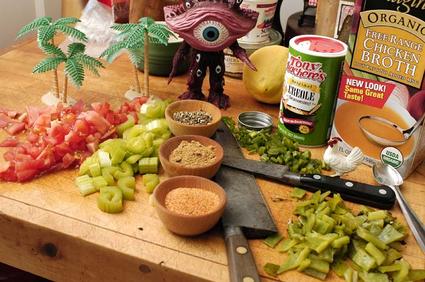 Get your chinch in the milk marinade first off (just enough to barely cover). Add 1 teaspoonful Cajun seasoning. Let sit on counter while you prepare yer meez. 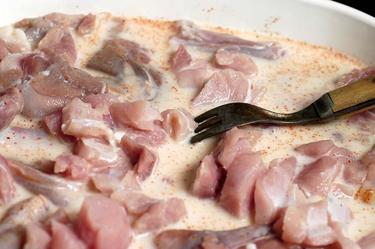 Roast chile peppers over fire, set in paper bag for 10 minutes. Scrape blackened skin off, no water! The water rinses flavors away.
Dice everything up small. This stew doesn’t take long to cook. The smaller the pieces, the faster they cook. I guess you could say, “Chinch cooks in a pinch!” Sorry, I owe you a dollar for that one.
In a good sized heavy stew pot (large enough to hold all ingredients) brown your meat in olive oil. Discard marinade, foo. 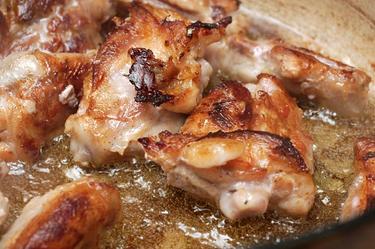 It browns right up, ain’t it pretty? Kinda surprised at the clean mellowness of the meat. It isn’t gamey and it slices like pork does. The smells wafting from the stew pot are getting quite nice! Kinda hard to describe well, this time.
Once the meat is browned, remove and let drain a bit. Add onions, celery and chile to saute for 7 minutes. At this point, if the oil level is too high, just drain and then add everything all at once. Stir and heat ingredients. Add chicken broth. I think I actually added another cup more than what I listed in the recipe.
Simmer on stove for 1 hour with lid loose. If it doesn’t cook down enough, add a teaspoon of cornstarch to cold water, then add to stew. This will thicken it a bit and make nice.

Serve over rice, sprinkle with file.
Meathead and I just couldn’t resist. While the stew was simmering, we deep fried some chinch cubes that we’d coated in Dixie Fry and cornmeal. So, while we were stirring stew, we ate Chinch Poppers! 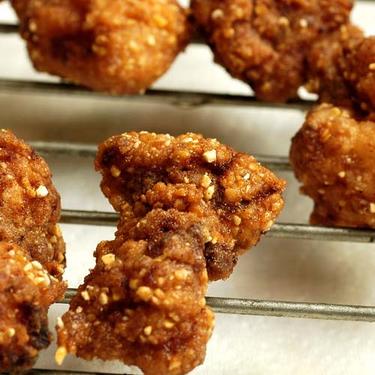 Okay, I know you’re skeptical. But I’m telling you, it turned out great. Sure the first couple of bites were scary to say the least, but they disappeared one by one. After the hour was up, it was time for the stew. Slowly we turned, inch by inch … we swallowed our chinch! *-rim shot-*
The broth was absolutely 3 dimensional and about as Cajunny as you could ask for. The meat was tender, like pork chop tender. We were both impressed. Mostly because we were sure as heck after making both dishes we’d be eating at Pup Hut. Nope, we ate our fill, ear to ear smiles. I, for one, am sold.
Biggles
ps – April Fools !!! But it looks as though ya’ll didn’t take the bait.
You’re right, it wasn’t Chinchilla meat, sorry about that. It was Chef Denny’s alligator meat. 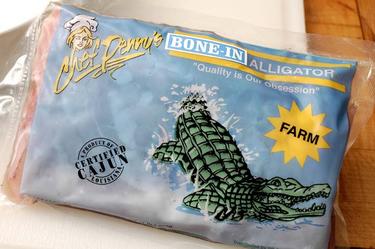 While this was clearly and Aprill Fool’s joke, the recipe and outcome stands. The alligator was great and would do it again. The only thing I would do differently would be to trim the meat better. It can get parts that are chewy and kinda marine tasting. Other than that? Total success. 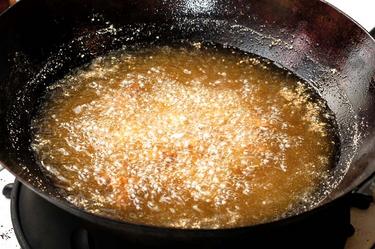 On a more personal note, I’d like to say that I totally didn’t screw up the deep frying of the alligator. If you’ve been a reader for the last few years or so, you know I’ve screwed up every deep frying event, if not all of them. I used a wok this time and it delivered me a solid victory. Yes, I’m taking notes.
I win!