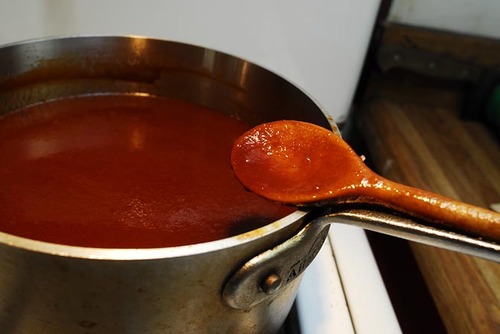 I’m a Californian, born & raised. This, by sheer definition, means I don’t know what barbecue is. I can live with that, but it isn’t easy. I’ve fought through teeth & nails to read, listen and scour the net for help. Most of this I did back in 1998, as far as the net is concerned. In the traditional sense, I just did what I thought was right and to hell with the rest. If my rack of ribs cooked slowly for 5 hours with real wood, that was good enough for me. But I wanted more, I wanted to taste the regional sauces of the Carolinas, Texas and/or St. Louis. I tried, but didn’t come up with anything that was worth doing a second time. Until yesterday …

10 years ago I used bbqsearch.com as my gold standard for people that knew barbecue, inside and out. I cooked through nearly each recipe for sauces that I could find. I never did find a vinegar based sauce that I could put in my mouth, and the sweeter ones never came even remotely close to mine. I gave up and moved on, never gave it much thought. I always figured that some day I’d run across something that I could stomach, this day has come.
A month ago I was invited to Fatted Calf’s Picnic, a never to be missed happening. Well, along with all the world-class charcuterie, home brew, brew, home-pickled pickles, & Napa Valley splendor? A BBQ sauce that Taylor had come up with was in attendance. The velvety rich, tangy, then sweet sauce made me jump with glee. No really, this was good shit and I wanted more. It was a cross between the Carolina vinegar with a sweet overtone of the St. Louis to Texas love. This was a finishing sauce worthy of my smoked ribs, brisket or whatever. Filling it with pulled pork and inserted to good bun was what I was thinking of. This was good, really good, and I liked it.
Naturally I sent off an email and asked them to bottle it so I could buy it along with my other needfuls. A week passed, and what I received was an email stating that nothing he has is a secret and here’s the recipe. Okay, so it was obvious it wasn’t going in to production, but how awesome is it to get the recipe to the best ever BBQ sauce of all time? Very, just so you know.
I’m here to pass along the goodness, I tried making it myself yesterday and it came out nearly as good. I suspect his duck gelee outclassed my chicken jello, oh well. I also think his blackstrap molasses was richer along with a better coffee. But this shit was face down in the bucket good. Plus it was simple, interested? 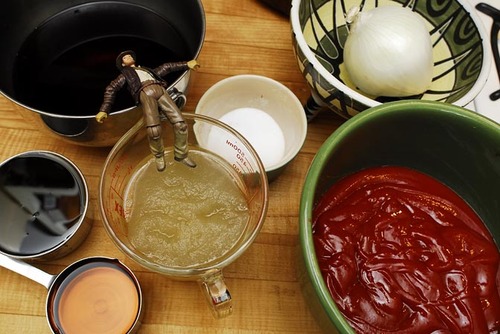 Here’s what you’ll require:
1 Onion, minced
3 cups red wine vinegar
2 cups stock or duck gelee
3 cups ketchup
1 cup blackstrap molasses
1 cup coffee
1/2 cup bourbon
Instructions:
Note: I didn’t have any duck gelee, so used chicken jello and rendered chicken fat.
Mince onion and make translucent in chicken fat (maybe 2 tablespoonsful), add vinegar. Reduce by half.
Add 2 cups of heavy stock and simmer for 20 minutes.
Fold in 3 cups of ketchup, one cup of blackstrap molasses, 1 cup of coffee and half a cup of bourbon. Simmer for 5 minutes, adjust seasoning and use according to
your twisted little desires. 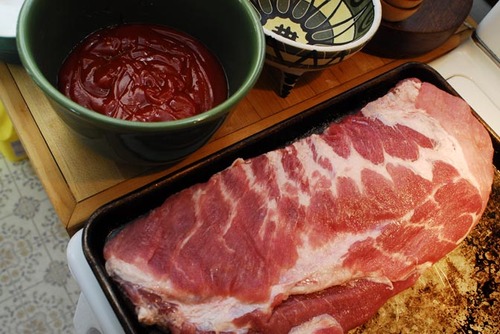 The ribs I smoked were only marinated with salt for maybe 3 hours, it’s all you need. Smoke, meat = greatness. Sauce to finish and it doesn’t cover up any of the meat perfection or intrude. It’s good and I endorse it.
Biggles

11 thoughts on “Finally, a BBQ sauce I can live with – a recipe”