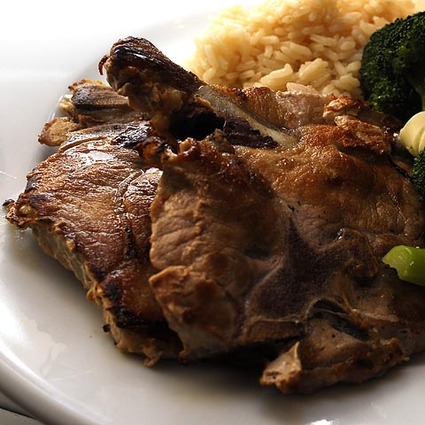 Not anywhere near every meal is postworthy, nor is it noteworthy. However, if it was memorable and the photographs came out, that just squeaks by my meat-radar. Sure, I was going to try to use, MeatDar. But that sounded really dumb.
All the meat this week was purchased from the Grocer of the Year, Omar of Joya de Ceren, Richmond California. First up we have these fine pork chops. Yeah, they’re cut pretty thin, it’s the Latin way. So, for 1 adult and 2 boys I bought 5. MmMmmm, 5.
Tucked away in the corner is a load of El Salvadorean rice, cooked in butter and chicken broth. Oh yeah, and some steamed broc. The rice is so plump, so tender and full of flavor even without the butter and broth, it’s the best white rice I’ve ever had. While thin, the pork chops turned out really well. There was enough fat and I didn’t cook them very long. Preseasoned with salt is all, SEAR. 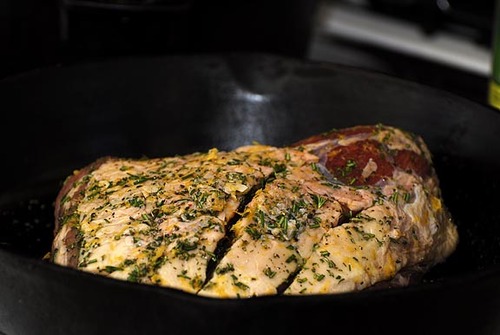 #2 this week was a rather large, yet happy tritip beef roast. We arrived home later than usual and didn’t have much time to get this one rolling. In fact, we ate about 30 minutes later than usual. That’s okay, I jacked the oven to 400 and preheated the cast iron skillet with a trivet underneath.
The fat was still on the roast, thank you Omar! I cross-hatched it with a sharp knife. Poured in extra virgin, salt, pepper, fresh rosemary & lemon zest.

I think it only took about 45 minutes or so to cook to a bare medium rareish. I should have checked it at 35 or 40 minutes. Even so, there was enough pink for me to enjoy. Man, beef can go from perfection to boot in no time flat. 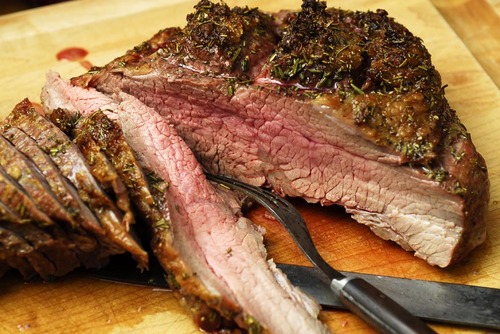 The tritip was just as expected, tender, toothy, rich with beefy flavors and the citrus really drove home the action. The only thing that would have made it better would have been maybe 3 bacon rosettes perched up top. And gravy. Gravy or ‘sauce’ (the low calorie cousin, wink-wink) would have dotted the i’s.
Cheers,
Biggles

11 thoughts on “meat of the week wrap up”