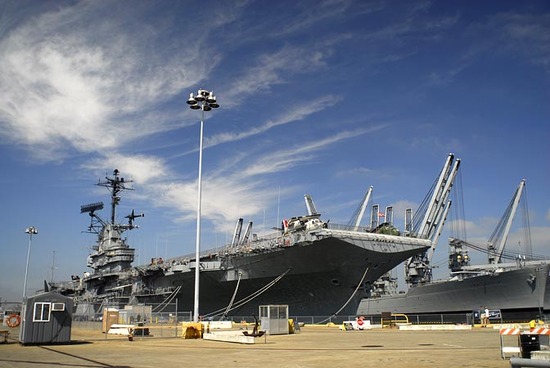 Oh Biggles, don’t you cook anymore?
Um, no. No I don’t, only run the dishwasher once a week or so. Mostly full of cups, flatware and a whisk or two. Been up to other things and food hasn’t been a part. Don’t sweat it though, I’ll be back and am eating well in spite of not cooking.
Guess where I went Saturday morning? The USS Hornet at Alameda Point (old Naval base & home to St. Georges), that’s where. I knew the Red Oak was in Richmond, just needed to get off my ass and get down there. But I had no idea that Alameda housed a real aircraft carrier. Much less an aircraft carrier museum!
It ain’t cheap though, not like the Red Oak. This one is 14 bux per adult to get in and you must be led about by a docent. No wandering around on your own to stick your nose in here and in there, pull this and open that. Which is fine, it’s a dangerous place and you don’t want to die er nothin’. Especially when you pay 14 bux to do it. It kinda reminds me of the Winchester Mystery House. A huge place with tiny rooms & even smaller walkways.
If you’re interested in visiting, check out the link above. And if you’re interested in the history surrounding the Hornet, go for it. I’m not going to pretend as though I’m someone I’m not, this would be an American history buff. I know how to build a fire and cook food over it. History to me is a fire pit filled with pork rib bones and beer cans scattered about.
Here are a few snapshots of the USS Hornet I took along the way. And yes, that’s an escalator. It goes from the flight deck down a few levels. I spose the pilots were all woozy from flying and needed a safe way to descend to rest. And the cool exposure was a “mistake”. I had my camera all set from a small studio shoot I did Friday morning. It was after this shot I sat down for a bit and reset all the dials, buttons and menu choices.
Biggles