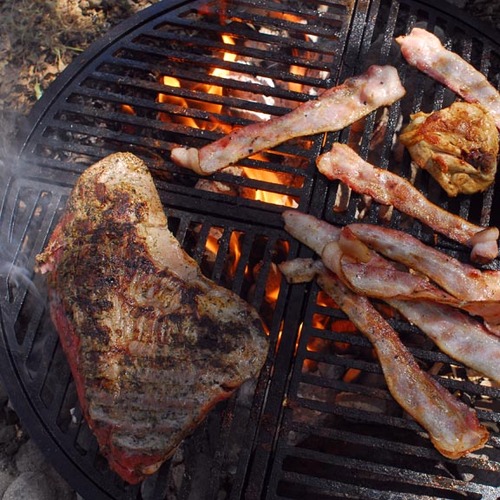 Big D emailed me more than a few weeks ago and had stumbled on this new product (came out in June). This new product is a cast iron grate that is a replacement for the old chrome grill in a Weber kettle. Cool, eh? He emailed the guy extolling Meathenge’s virtues and said I just had to have one for review. Who am I to argue about such things? 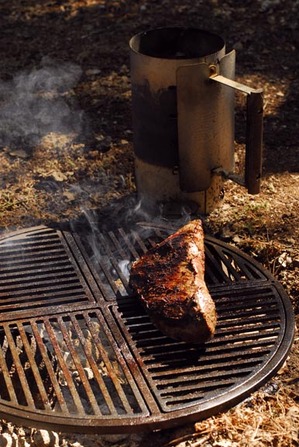 It showed up directly and I monkeyed with it, figuring on dusting off my old kettle and seeing what this new fangled thing could do on a Meathenge Review. The deal was, the following weekend the boys and I were due up in Calistoga for fun and merriment. I usually cook in a hole in the ground, makes things so much simpler and less expensive. Not only do I not have to haul a grill up, but Jeffrey doesn’t have to buy one just for me to have when I’m there. Just toss an old grate on a few rocks and we’re done. An epiphany, I’ll bring the cast iron grate and use that over a hole in the ground! Duh.
I’m glad I thought of it. Sunday afternoon found me cleaning out my hole, the rocks were in fine shape. A fire was started, let it mellow a bit and set the grate down. It’s pre-seasoned, all ready to go. I grilled sausages, chicken parts, country style pork ribs, bacon directly and a beef tri-tip roast and all came out perfectly. It was a dream to cook on, although squatting next to a fire pit for 3 hours does have its drawbacks. Ouch!
The inventor contacted all the major players for distribution of this grill and had no takers. Personally, I believe they really screwed themselves. Now it’s being sold directly, bypassing all the major corporations, go man go!
I will be doing another review wherein I install this to my kettle, but I felt this product really needed to hit the street sooner than I could get that ready. And this was a perfect opportunity to test its mettle, heh. It performs exceptionally well, the build quality is high and it’s a joy to use. I know the 2 guys that have weber kettles at the party will be ordering this very soon. Don’t even remotely wait to order yours, you need it. Remember, you’re not sending your hard earned money to some large corporation, you’re sending it directly to the guy who invented it.
Craycort’s Cast Iron Grate replacement for the Weber kettle grill. Price is approximately 85 bux for the 22.5″ one.
Biggles 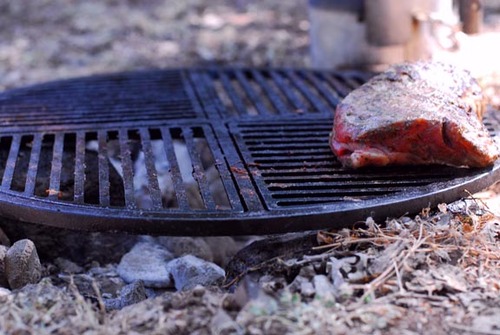