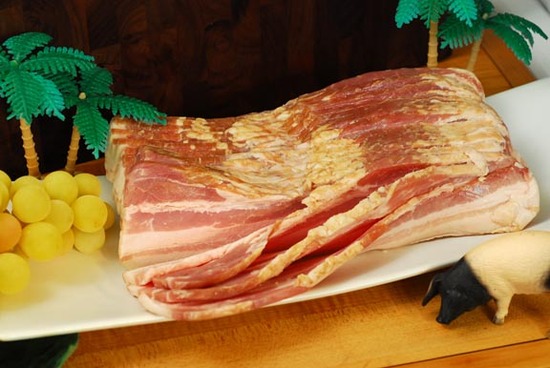 By “review” I mean that I got this bacon for free to see what Meathenge Labs thought of it. Pretty cool, huh? I spent some time reading through U.S. Wellness Meats web site, there’s tons of decent content in there. Wellness was founded by John Wood, a fifth-generation farmer. In the beginning he used traditional ranching methods, but over time took a sideways look at how he was doing things and thought there could be a better/different way. Starting in ’97 he raised a few of his cuties on a 100% forage diet, rotational grazing and making sure they had the best forage action on a daily basis. By 2000 it was in full swing, the tests proved he could make a better product this way.
I read in their FAQ page addressing how come their not certified organic, made me sick to my stomach. They state it better than I do, so I lifted this from their page without permission:
“All U.S. Wellness Meats pastures and animals have been maintained with organic principles in mind since 2000. Unfortunately, the state of Missouri dropped a state-run organic-certification program and turned it over to a private certifier several years ago. The private certifier wanted 3% of the gross income of the preceding year to maintain the license. We politely said no, and felt if Thomas Jefferson were still alive he would concur. Sadly, greed has infiltrated a noble cause. 50% of the Missouri organic producers have let their certification lapse since this situation was created by the Missouri legislature.”
You read that correctly, ranchers have to give up 3% of their income to maintain certification. Sigh.
Anyway, enough of that it’s making me mad. I had to take another look at the bacon to make myself feel better. Listen up, they got good bacon! The meat is substantial and the fat is creamy, very mild & clean odor upon opening up the package. I preheated an old 14″ cast iron fry pan and set to cooking, used a bacon press. It’s nice and thick, so it takes a bit to brown and finish. Once it was patted dry with paper towels, it went in to my mouth. Excellent meaty texture on the teeth, low on the sweet cure, a good clean finish. For my package, I noticed it was quite lacking in smoky flavors, kinda surprised. A while back I had a chance to get two packages of bacon to try, one was smoky, one was not. So, I can’t say whether the lack of smoke flavors is typical or just something that happened. Maybe it wasn’t rotated and/or flipped in the smoker, that could have been it. I just don’t know.
In any case, I’m going to give this pound of bacon 3.85 out of 5. With good smoky flavors, I would have given it a 4.75 out of 5.
xo, Biggles