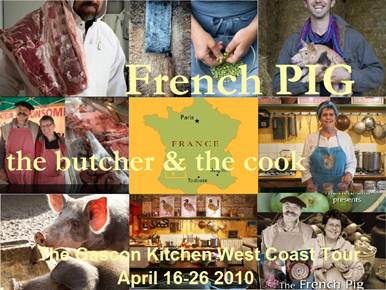 Kate Hill of Kitchen-at-Camont a French culinary retreat in Gascony just sent an email letting me/us know of an upcoming class we can take! Lucky for us we don’t have to travel to France, just the Napa Valley. They scored the kitchen at Fatted Calf, cool huh? She’s traveling with a French pig farmer / butcher, Dominique Chapolard. I don’t know the guy, but after reading the words she sent, this sounds like a must do. She states that the Portland class sold out in only a few days, so if you’re interested, jump.
FRENCH PIG: The Butcher and the Cook
An Evening Workshop of Butchering: French Cuts Butchery Plus Artisan Pork Tasting
Date: April 16, 2010
Time: 6 AM – 10 PM
Location: The Fatted Calf- Oxbow Public Market, Napa CA
Cost: $195
On a small farm in southwest France, Dominique Chapolard and his three brothers grow their own grain to feed their own pigs, eight to ten of which they prepare every week for five local markets. At market, they sell their fresh French cuts, like roti, cotelettes, and longe, along with their housemade charcuterie like saucisson sec, jambon, and fromage de tete. Together with the Chapolard family, Kate Hill, culinary teacher and owner of the Gascon Kitchen, a cooking school located just a short drive away from the Chapolard farm, offers butchery apprenticeships and other learning programs in France.
In April, Kate and Dominique will travel to the United States to share their cooking and butchery knowledge. While in Napa, they’ll join forces with Wil Edwards of the Artisan Food School and the Fatted Calf Charcuterie to offer an evening participatory demonstration master class. In this workshop, Dominique teaches students how to transform a pig into premium French cuts, using seam butchery, a traditional European method of breaking down animals according to their muscle seams, as opposed to cutting through muscle as is often done in many American butchery shops. As Dominique demonstrates on a whole mature carcass, Kate teaches them how to transform basic cuts into traditional French recipes. The class will finish with an artisan pork tasting with Carrie Oliver presenting four different breeds of artisan pork and charcuterie tasting and discussion of full-circle farming methods in France. |Students will go home with a share of the meat butchered in the workshop.
Reserve online at: http://frenchpig.eventbrite.com/
Contact: Fattedcalf or Kitchen-at-Camont

6 thoughts on “FRENCH PIG: The Butcher and the Cook – A Class”