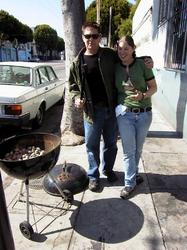 Introducing Shelly & Amelia, MeatHenge’s new ace reporters. Please let’s give them a helloooo. Helllooo.
Credit for images & article are theirs.
It’s Sunday in the city. It’s hot, for once, and everyone has come out of the woodwork for the Giant’s game on Father’s Day. We are headed to Sadie’s Flying Elephant to review the weekly Sunday afternoon barbecue, and we pass the Hotel Utah, a recently reopened landmark, of sorts, for those who have been around the City awhile. What should we see? nay smell? outside? A big, glorious grill, with meat stacked as high as the SoMa condos, smoking as high as an Oakland fire. “Oh to be there!” we cry. But alas, we’re on a mission from Biggles. 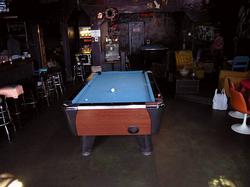 At 4:00p.m. we roll up to Sadie’s, park on the corner, and maintain an element of conspicuous vouyerism while scoping the joint out. The bar doesn’t seem to be open but there is a barbeque grill sitting out front. It’s obviously very lonely and the only promise of any company on the block seems to be a plastic bag blowing down the block. “It was the most beautiful thing I’d ever seen.”
So we go in and realize the bar hasn’t yet opened. Jessie Jane hollers out,
“Hello!” from behind the stacked barstools on the bar. Having expected a fat spread upon our arrival, we discover the error of our assumption. The bar lights aren’t on, the jukebox is quiet, but most importantly, the grill is lifeless. Jessie explains that things don’t normally pick up until five. We excuse ourselves, telling her that we’ll be back in about an hour, so she has time to set up. She sends us on our way with a meek admission that she’s accidentally purchased QuickStart Briquettes. This is not looking good. 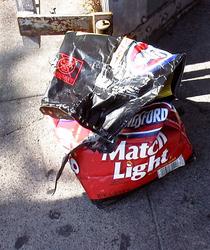 It’s now 4:08 p.m. We’re hungry, surprised, and most of all wondering about what sort of smoky flavor can possibly be procured from QuickStart Briquettes. We have seen the Kingsford ad where people of all different ethnic backgrounds and people of all ages agree that-even if it’s not Kingsford-barbeque starts with the charcoal. It occurs to us that we’ve smelled some good charcoal recently, so we return to the Hotel Utah … 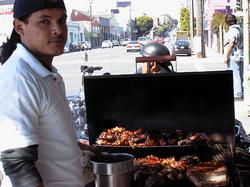 … where Melvin is steadfast at the grill, mounds of chicken thighs and legs and burgers and big ol’ beef ribs before him. There is a vat of barbeque sauce next to the kegs that had been rolled out into the street, and we got to thinking the Utah’s got the right idea about this barbeque stuff. 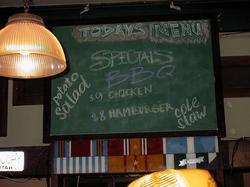 We lick our chops and head indoors where live music drifts between the coastal breeze and the smoky barbie smell. We are preparing to place our meat orders when we notice the prices on the menu. (PrincessofCairo note: I thought the prices were outrageous, but Sheldonatra tried to explain to me that we are just broke, and can’t afford the SoMa meat.) We don’t even have enough to share a plate of cole slaw. So we slobber over the grill until Melvin shooed us away with his tongs. 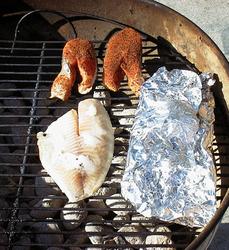 We get back to Sadie’s just in time to photograph the light tan ash blowing off of the QuickStart coals. We have never seen such a color before, certainly not on a grill preparing to accept meat.
Jessie explains that the QuickStart coals have to be replaced! Sheldonatra offers to go for backup.
Within minutes, she returns, and the real coal-burning begins. 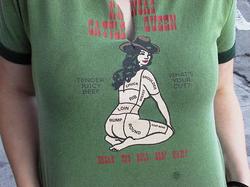 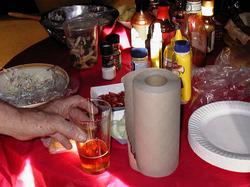 Jessie presents a cooler full of Oscar Meyer wieners. She explains that regulars bring meat and fish to grill. Things are looking up.
Jim grills up a steak. Scott brings salmon steaks that a buddy caught, halibut from his mom, and string beans for his lady. Jessie’s boyfriend Eric grills up a nice rack of pork ribs that “came out of that bag,” and corn on the cob. Within an hour, the place is full of happy, stuffed patrons. 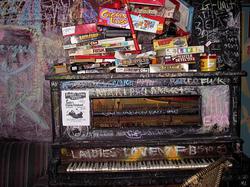 Sadie”s will be throwing a BBQ competition on the Fourth of July at 2 p.m. They will have a six-foot long grill for contestants, but the old Weber standby will be on the corner right where we left it for non-competing grillers. There will be bands beginning at 8 p.m., and judges like Big Timba will reward the best grillers with prizes. Although they’ve got the Red Tail Brewery as their sponsor, they
face steep competition from neighborhood backyard BBQs that tend to run rampant on the 4th. However, Sadie’s has a great atmosphere, a fine selection of tunes on the jukebox, two pool tables (fifty cents a game!), and a dozen beers on tap (Happy Hour from 4-7 every day – $1PBRs!). If you’re looking for
something to do this 4th of July, head over to Sadie’s.
Tentative schedule:
2:00 Bar opens
2:30 Grill opens for competitors.
5:00 All meat must be turned into judges. Grill opens for D.I.Y. grilling.
5:00 – 6:00 Judges do their judge thing.
6:00 Winners announced. Party ensues.
8:00 Grill closes, Lil’ Mike continues the party till the wee hours.
CONTACT: Jessie Jane
491 Potrero Avenue
San Francisco, CA
415.551.7988 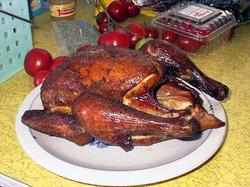