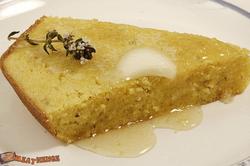 What a strange trip this has been. It all started innocently enough. Meathead (brother inlaw) has his way of making corn bread. NO COOKIE INGREDIENTS, is the guideline. No flour, no sugar. He wanted the bite and crunch of the corn meal, nothing in the way. His grandmother made it this way and unfortunately she never wrote it down. So Meathead has been winging it for years, tweaking this and changing that. I was lucky enough to get a piece a few months ago, heaven. I asked for the ‘recipe’ and he was kind enough to put something down. This last Sunday was time and off I went on the hunt for the perfect cornbread. 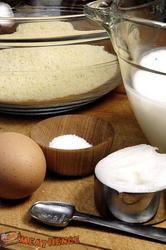 Here’s the recipe he sent me:
2 Cups Corn Meal
2 Cups Buttermilk
3/4 teaspoon Baking SODA
1 Egg
Salt to taste
1/4 Cup of lard/bacon grease/shortening
NO SUGAR!!!!!
(optional) 2 scoops of mayonnaise
This seemed simple enough. I got my meez together and off I went. The oven was set to 350 before I started. The egg, lard & buttermilk were alowed to come to room temperature. Lard up your favorite cast iron skillet, preheat for 15 minutes. 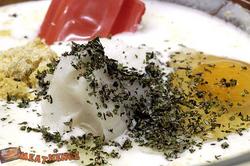 Ain’t it pretty? It all came together just fine. I popped it in to the oven and checked it at 20 minutes. Nope. The toothpick didn’t come out clean until another 15 minutes. 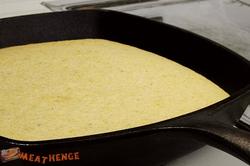 Hmmm, no browning. No sugar either. Could have probably jacked the heat to 375 or 400.

Melty butter with melty warm honey. Hard flat and bitter from all the buttermilk. I was the only one that ate the entire slice, toss to the trash. This was NOT the corn bread I’d had a few months ago. No sir. After about an hour, I was ready to try again.
This time ol’ Biggles was going to fix things. I used a recipe off the side of some corn meal box I had laying around. The meal I’d bought from our local hippy store, some bulk stuff. Anyway, here’s how I modified it. Fluff it up a bit, ya know?
4 thirds Cups Corn Meal
2/3 cup unbleached white flour (stoned buhurerrerr)
1 Cup buttermilk
1 Cup whole milk
1 TBS Baking Powder
2 Eggs
2 or 3 lumps o’ butter
1 tsp salt
Sprinkled fancy sugar on top of batter in skillet before cooking
1/4 Cup of lard/bacon grease/shortening
1 dollup mayonaise 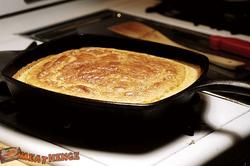 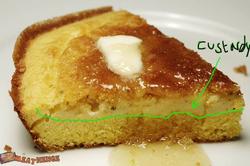 Melty butter with warm honey. It wasn’t until I forked off a piece and bit down that I noticed the corn bread had separated on me. On the bottom was corn bread and on the top was some kind of custard, or something. Click on the image above, I’ve pointed out the separation there. My wife walked in, looked at it and said, “Uh, no.” and walked out. I tipped the skillet in to the trash, cleaned up and went to bed. And that is pretty much how Sunday went.
Upon hearing of my failed attempts, Mr. & Mrs. Meathead showed up Monday night with a pan of corn bread he’d just made. Heaven. Meathead admitted it was a ‘work in progress’ recipe. “Gee, no kidding.” said Biggles. But that’s okay, I’m batting even worse with the Southern Fried Chicken.
Xo Xo