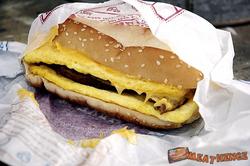 When he shows up to work with one of these things in tow.
The commercials for the recent Burger King sandwiches are quite funny. Some guy waking up in bed to find some life sized plastic cartoony king next to him. Or the one for this breakfast sandwich, where this guy opens up the window shade only to find the same king outside his window with the birdies and a nice looking breakfast waiting. What gives these commercials a creepy air is the fact this king doesn’t say anything or have any moving parts, just stares with an odd look on his face. At least Chucky had a moving mouth and eyes. Good stuff.
After the commericals are over and you find yourself in the drive-thru lane, hungry and ready to open up your meal to find this? Egads man, so disappointing. I expected so much more from Burger King.
Supposedly it has 2 slices of American Cheese (Why American? Why us?), 3 slices of bacon (not sure of their definition of bacon), 2 Omelet Egg (what the hell is an omelet egg?) and 2 halves of Sausage Patty (2 halves? Must be a size issue). And speaking of size, if I got this for lunch, I’d be disappointed yet again.
Here’s what this brave Employee had to say, “The eggs were fluffy, yet bland. Bacon crispy, sort of, but didn’t crunch. Typical spongy nothin’ bread with odd molten velveeta-like cheese (couldn’t afford real velveeta I suppose). It coats the sides of your tongue and won’t leave.” He was smacking his mouth like a dog with peanut butter in it, I had to stare. Employee did say the sausage patty was okay, but he started holding his gut and making funny faces. Funny faces to me anyways.
Here’s what Burgler King thinks the Enormous Omelet Sandwich looks like. That’s funny.
This rig is sportin’ 2080mg of sodium (that’s a lot by the way, almost as much as a can of Cambell’s Cream of Chicken soup). 760 Calories with 450 from fat. Not much trans fat though, yay?
This food would almost be funny if weren’t so tragic. I have nothing more to say on the matter, move along.
UPDATE: Okay, so one more thing. 1 hour later Employee showed up in my office, wanting to give me the scoop. He still feels sickly and feels as though he has the capacity to drink maybe 5 gallons of cool refreshing water. Jeez man, it was only two thousand miligrams of salt! Wuss.
Xo Xo

3 thoughts on “When is it okay to point & laugh at someone’s food?”