Man oh man, you don’t know how long I’ve been waiting for this. Probably 6 months ago Meathead offered up this idea and I swore to the Norwegian Meat Gods I would carry it through. Rarely do I jump in to any holiday with themed recipes or foods for Meathenge, but this warranted my attention.
How could anyone pass up the opportunity to cook rabbit for the Easter holiday? 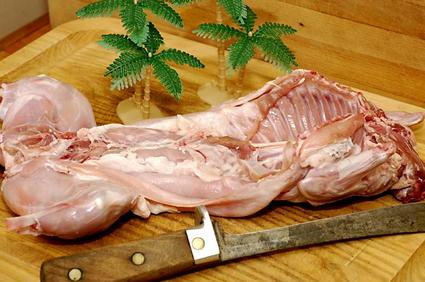 I’ve cooked rabbit before, but it came in nice pieces, no big deal. But this time I wanted whole rabbits, fresh ones. I asked Rick the Butcher from Rick’s Quality Meats in El Cerrito if he could get rabbit. “Yes,” said Rick. “Two please,” says I. I couldn’t believe I was getting things done in time for a holiday, I never do this.
Here we are, with a whole fresh rabbit. I didn’t consult any online page or book to cut it up, seemed easy enough. The rib cage area and the hind quarters needed separating. Then, that back area was cool lookin’ and had belly meat flapping around. It pieced out very quickly and at least looked as though I knew what I was doing. I didn’t cut off the legs, arms from the thighs. They’re not large enough, as near as I could tell. 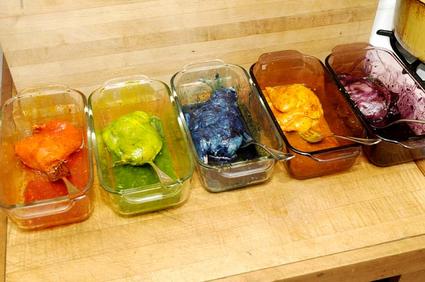 I first fired up and got ready the smoking fire. One could grill or sear these rabbit pieces any way you would like, but I wanted to smoke them gently for an hour or so. Something easy to deal with. Once the fire was going, it was time to get the rabbit ready. It takes just over an hour to get them both ready for cooking, these being the meat & fire.
I mixed up a little fresh orange juice, lemon squeeze and mostly lime. Then very tightly minced some onion and garlic along with some toasted cumin seed. Spread evenly over all the extra virgin, must have. This Cubanny idea came from Kevin over at Seriously Good, thanks! A little s&p with some organo and we’re in. Since I wanted to marinate each piece a different color, it took a few dishes to keep them separate, but equal.
I don’t know why, but the fire was fighting me the whole time. Either it wasn’t hot enough, or it had burned out my mesquite, grrrrr. But after a while, it came together and it was time to lay it down. 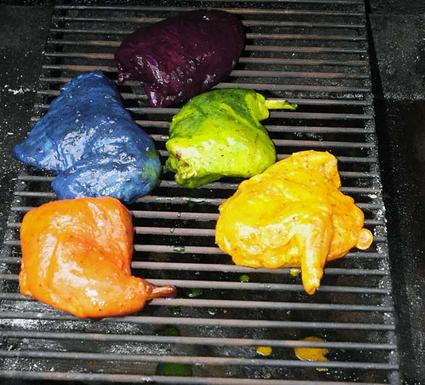 Silly enough for you yet? 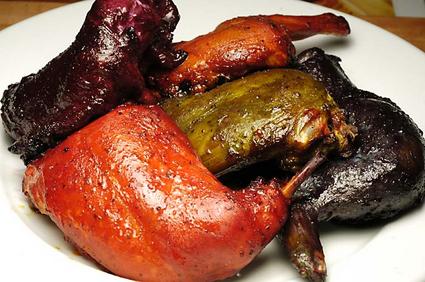 I wish upon you all good health, fortune and good times this weekend. Happy Easter!
Biggles