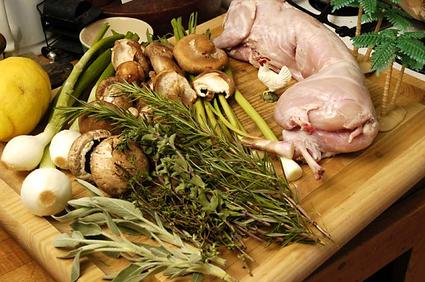 Oh man oh man, oh man. The weather here is bright, warm and clear with a finish of crispy clean. The family and I recently returned from a fine 2 day getaway and are doing well. I come here today with a recipe I sorta followed from a newly translated cookbook, La Bonne Cuisine by Madame E. Saint-Ange. This revered tomb was lovingly translated by an amazing man by the name of Paul Aratow. Why am I so googly over such a cookbook? It was originally published in 1929 and has probably been a bible of sorts for many French Chefs since then, such as our beloved Julia Child. And today, I find it such a great big fat hairy deal because only last year was it released in English!
At first I considered the recipes a little long winded, mostly because for the 1 recipe I was interested in for that moment, I already knew most of the ins and outs. But then I realized, if someone didn’t know how to deal with wild game (a rabbit), this book lays it down so you know what to look for and how to judge. This book is a walk-through guide to French cooking and a glimpse in to the past. Some times it’s this good to be alive.
Before we dive in I would like to give a warm congratulations to Ten Speed Press of Berkeley for landing the opportunity to publlish this book. This most surely is a chesire moment for ya’ll. Okay then …
I have a whole fresh rabbit, a fancy cookbook and a little time. Interested to see how it all came together?

Biggles found himself at high noon, anticipating the final destination for said rabbit. I pulled it from the fridge and laid it down to get the chill off while I prepared the stuffing. While this is a simple recipe, it isn’t for the beginner. The rabbit is a tender being that can’t be ruffled or abused. The meat is slight and care must be taken at every step. Browning meat in butter takes careful eyes and a watchful snoot. And you need a really large fry pan of some sort to hold the darned thing. I ended up using a non-stick rig that I use probably once every two years. I cringed having to use it, mostly because we all know how lousy non-stick is for browning anything. It’d have to work, this time.
Ingredients:
Rabbit 1
Chipolata sausage 20 (they small)
Chestnuts 30 (simmered)
Butter 3 Tablespoonfuls
Flour 1/2 ounce
White wine nearly 7 fluid ounces
Bouillon 1 2/3 cuppas
Tomato puree 1 teaspoonful
Bouquet of parsely, thyme and I through in some sage with a bay leaf
Ah, let’s us have a look here. I don’t have the correct sausage, so I used Fatted Calf’s breakfast sausage. Perfect because it contains many of the herbs used in the dish. I didn’t have chestnuts either, so I toasted some crushed walnuts in a dry cast iron skillet. What kind of white wine? The kind you have, that’s what kind. Actually, the recipe didn’t specify. I had some fresh and totally bitchen fresh shitake mushrooms, so I minced a few up.
Since I didn’t have the correct sausage, I rolled up the breakfast sausage as though they were tiny links. And since I can’t leave well enough alone, I minced up a little green garlic and little onions that still had their green stalks on. I would like to think the French peoples back 70 years ago would have also used what they had on hand, eh?
Brown the sausage, set aside. Don’t thoroughly cook. 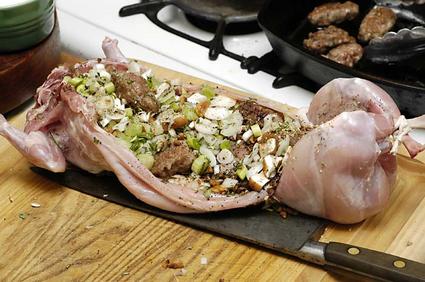 I rubbed rabbit’s cavity with extra virgin, salted and then peppered it. The recipe said to use spice as well, not sure what that is. I figured I had enough going on. Layer in your browned sausage and ingredients. Reserve some sausage to put in the pan during cooking. 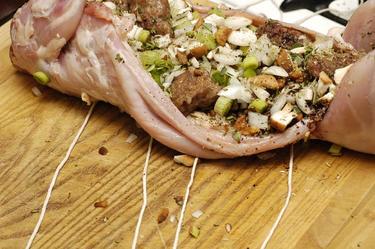 While you’re adding your stuffing, take notice of how much you’re putting in. Stop and test to see if you’ll be able to close it back up when you’re through.
Reserve some sausage for the pan.
The recipe says to use a kitchen needed to sew the rabbit back together. I don’t have a kitchen needle, so I decided to tie it up using butcher’s string. I cut off some lengths and laid them under the rabbit.
Note: Since this isn’t a breaded stuffing, don’t worry about over-stuffing. 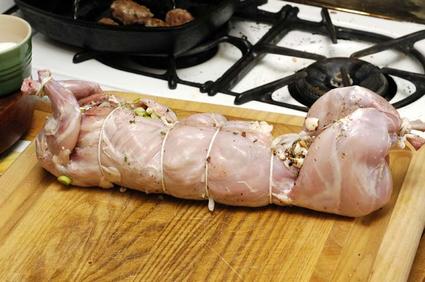 And there it is! All neat and tidy. Please notice the legs are tied together, helps hold in the goodies. 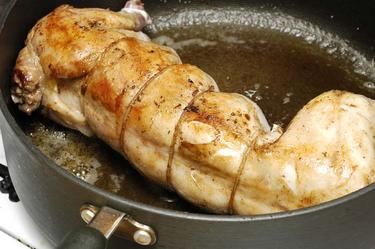 Preheat your pan a bit, foam the butter and put in yer meat. The book says to brown in butter, but don’t let the butter itself brown. I’d have to have a fussy French chef show me what that’s all about. I did my best and it looks just fine, to me.
Sprinkle flour over rabbit, lower the heat and brown a bit more, don’t let the flour turn any darker than a very light brown roux.
Dilute with bouillon and wine, slowly. Bring to a boil on a strong heat, shake a bit to loosen any bits.
Cover the pot and reduce heat so it has a gentle simmer for 1 hour.
30 minutes in, add the remaining sausages. I stirred from time to time to make sure things were okay. 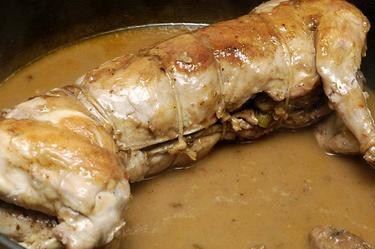 What do you think? How does it look now?
Let me say this, since Rabbits are all dark meat and it’d been browned in butter, the aromas coming from this pan were outstanding. The rich flavors and creamy textures were jaw dropping. Ya know, you can give French cooking a hard time if you want to, or complain about the fussy nature, but dammit this shit is good. Even if I didn’t follow the recipe very closely. Personally, I feel worse about browning the little dear in a non-stick more than I do about not using traditional ingredients. I’ll have to remedy this in the future, oh yes. 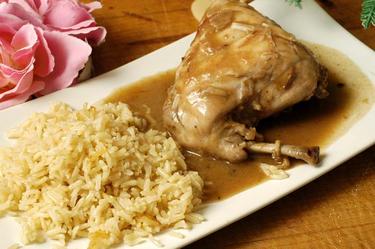 Both Mama and I loved this meal. It was quite rich and we should have had something green and some crusty bread. Oh well, maybe next time, eh? This isn’t Meathenge for nothing, ya know.
On a parting note, if you’re on the hedge about purchasing your copy of La Bonne Cuisine, jump in. I paid the going rate at a local bookstore for mine. I wanted to make sure Ten Speed Press and Mr. Translator got everything they deserved for this jewel, it’s because I care.
Great meal, great book.
Biggles