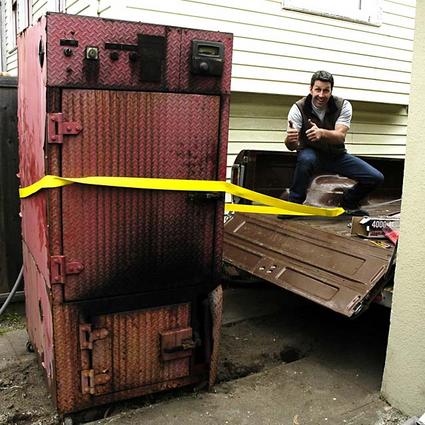 It was exactly 2 weeks ago when an email from Toponia rolled in. I noticed it just as the sun was going down on a nice spring evening. One of those evenings when the doors are open, windows are open and the neighborhood is so quiet all you can hear are the mosquito hawks knocking against the walls. Their smoker needed a new home, either mine or someone else’s, and we had barely 3 weeks to get it out. Did Meathenge Labs have the room? Was I willing to negotiate this 1200 pound beast out and through our citiy’s little streets? In a 1974 Ford pickup truck belching black smoke at every turn?

Shit yeah!
I immediately called Taylor and laid my claim, Thor would be mine.
I didn’t get much sleep that night, attempting to figure out how in hell I was going to move the darned thing. I remembered a picnic last year where I attempted to push it a bit, no noticeable movement from my 210 pound frame. Well, it is diamond plate steel with a steel frame, then filled with concrete. At 6.5 feet tall, this was truly a monolith of great proportions. A monolith that could produce a staggering 250 pounds of smoked meat at one time.
I said I’d be by Sunday with people and a truck. The day was SET. Then I emailed the manufacturer, J & R Manufacturing and asked them what the weight of their Little Red Smokehouse was. I was really impressed because within a day I got my answer, 2100 pounds.
Aroo? 2100 pounds?!? This changes things, this changes everything. No longer is this some cute thing, nor is it to be taken lightly. At 2100 pounds, there could be some serious injuries and damage is anything were to happen. All of a sudden deadlifting it in to the truck idea was over. Not even sure if the 1/2 1974 Ford would handle it. And I’m darned sure Ed’s engine hoist won’t handle it now. I cancelled our Sunday date, needed some more thought about this.
A week or so went by and another broken date. Chilebrown and I visited the smoker on a Saturday, he wasn’t convinced it would be that tough. Lean in to back of truck, lift up and slide in. I remember the look on his face when he saw it from down the driveway. I think, “uh” or “oh” was about it for that. Ol’ CB was also concerned for the Ford, “This IS a ‘work truck’, right?” Cause brother, when that smoker hits the truck, SMASH.
All told I lost over 2 night’s sleep figuring this out. Taylor and I spoke on a regular basis and I was sure he thought I was going to ditch. I just couldn’t. Not only did I really want the smoker, I didn’t want to screw them over so close to the due date. I kept up the thought processes and visited 2 fancy equipment rental places. The second one in Berkeley had exactly what I needed, a larger engine hoist. Not so large that it had to be delivered, but something that could handle a ton and was portable, perfect. I called Taylor, yet again and set another date for pickup. This just had to be it, do or die. Don’t screw up, don’t screw up, don’t screw up.
Uncle Meathead shows up to work with a back that is clearly, ‘out’. We’re down to me, Eric & Taylor for the move. AHHAHAHHAHHAHAHHH, waaaah. Don’t screw up, don’t screw up, don’t screw up. I’ll just pretend I’m 24 again and throw caution to the wind and get the job done no matter what. A sunny Tuesday morning and we were off. To the gas station. Said Ford has a 460 cubic inch V8 with trailer towing gears and a gas gauge that was accurate many years ago. Perfect, 9 gallons should do it. 9 miles and 9 gallons, should have a little left over, maybe.
Backing up the driveway was as though I was threading a needle with a tree branch, with leaves. It turned out fine and we were able to roll the smoker up to the back of the truck, and tip it. We tried to dead lift the ass end in, no fricken way. Not even remotely. We got the engine hoist together with some fumbling and odd looks. The smoker was strapped and the hoist began its upward motion. Slowly, slowly and it caught on a few things. When you see something that large, something that heavy, that far off the ground it makes you think 3 times before you even breathe too hard to the left. It took everything that hoist had to get the smoker in. And the smoker nearly swung back out … that right there nearly caused me a coronary. After it was slid in and in place, I realized I had sweat on the outside of my hair. Yeah, I’m not talking just my scalp, nope. This was huge sweat, manly sweat of manliness. We’d done it. And I didn’t screw it up. It took me probably 10 minutes to collect my goozlems and correct my chakras.
Coming back down the driveway I was sure the front wheels were off the ground, it was only when I turned to go down the street that I was assured. With a ear vibrating scrape of steel bumper on concrete, we were off! YEAH !!! At this point I have conquered the smoker and I own its soul. This is very important, because now there is no harm that this smoker can do to me in the future. I win.

Here we find me on the forklift unloading the smoker and Eric getting his two hams ready for the first smoke. Can you see his hams? Dang, those sure are some hams there Eric.
Since Tuesday is a work day for us all, I decided that we’d take it home later on. Besides, we have a 1956 12,000 pound forklift to wrastle the beast here. I can replace the wheels, clean it, paint it and figure out what to do with all the electronics. See, it’s been outside for a few years and most certainly the fans have seized, the thermostat and other items have rusted shut. This would cost thousands to have done professionally, I’m sure. So, I’m considering taking it down from a 220 rig to a 110 and replacing some fans. I should be able to come to a happy compromise here. This will result in a lower meat capacity, but should be enough for my personal needs. Don’t you think.
So, while the smoker isn’t in use at the moment. It is mine and the process of refurbishing has begun. Remember, my smoker can totally kick your smoker’s ass!
Biggles

32 thoughts on “My smoker can totally kick your smoker’s ASS.”