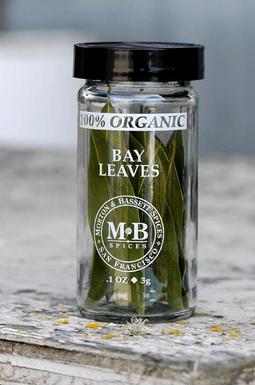 While I’d like nothing better than to find out why and how “100% Organic” Bay leaves are different or better than what I get from any other most excellent purveyors in my area. I think I’ll take turn with this post. See, Creepy E bought these fine leaves from our local Raley’s market for about $7.29. The recipe he had called for Bay Leaves, and he needed some. Being as picky as most of us food types are, he opted for the organic ones. Wanna know what caused him to call the company?

That’s right, these are NOT the warm and lovely Mediterranean version of the bay leaf. Both he and I opened the jar to find this highly sparky bay waft that causes one to say, “Dang, what the heck is THAT?” It’s the California Bay Laurel. Also known as the Oregon Myrtle, Pepperwood or Headache Tree, that’s what. These are not the leaves your recipe called for and would certainly ruin your dinner. Unless you knew what they were and pulled them early so as not to over-flavor your dish.
Creepy E called Morton & Bassett, located in San Francisco to see what the scoop was. They admitted on the phone that they were California Bay. But what he wanted to know was why they didn’t label them as such? The woman on the phone apologized that he wasn’t happy with his jar of bay leaves. Creepy E explained that it wasn’t that he wasn’t happy with his purchase, it was the fact it was mislabeled and these leaves are absolutely not a substitute for the warmer, milder Mediterranean version. And that was pretty much how it was left.
Low and behold, on M&B’s web site in the About section they state the following:

Eh? Just because a spice or herb is Big & Bright, it’s better? Where the hell are we, Texas!?!
Sigh. Ya know, if I’m going to pay approximately $1150.00 a pound for my Bay Leaves, I would at least like them labeled properly. Stop laughing, foo. Do the math, .1 ounce at 7.29 comes to 72.90 an ounce. Multiply 72.90 x 16 (16 ounces to a pound) and you get $1166.40 a pound. Not bad for something that’s indigenous to California and Oregon, eh?
Hmm, I need to wrap this up so there’s a moral or at least some closure here. I don’t have much other than to say, “Pay the fuck attention to what you’re buying.” Use your senses and your brain. Smell the ingredients you use, stop and count your pennies. Is a Hoffman chicken worth the money? Yes. Are organic California Bay leaves? Maybe so, maybe not. That’s up to you, the consumer.
Good luck!
Biggles
ps – The California Bay (I’m really tired of typing those two words) is called the Headache Tree because if the foliage is crushed and breathed in to excess, you get a headache. Talk to Owen of Tomatilla about that one.