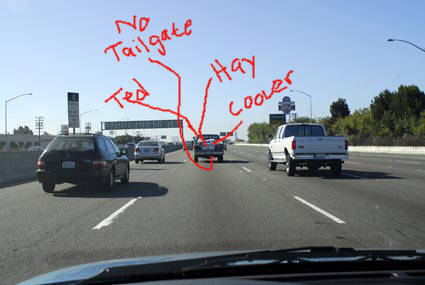 This just in, from yesterday afternoon, directly from Jlee. She spotted Ted!
You see, back in September I started a series called Where’s Ted? This would be Ted of Highland Hills Farm. Anyway, I realized that time and time again I’d run across either Ted and/or his famous rancher truck (beaten and muddy). Jlee had spied him on occasion, traveling at great rates of speed with hay flying in all directions. OH, it’s such great fun to find Ted.
This is where our story takes a dreadful turn. You see, while Jlee did most certainly find Ted, his truck was no wheres to be seen. Ted said he’d sold it, shudder. And you know what? He’s not saying what he replaced it with, no sir. Jlee wasn’t able to get it out of him. It’s a mystery!
Please if you’ve seen Ted, help solve this mystery. I can’t go on much longer not knowing what he’s driving, how will I know if I’ve seen Ted or not? The world needs to know.
Biggles

3 thoughts on “Where’s Ted? A series wherein we search for that elusive rancher”