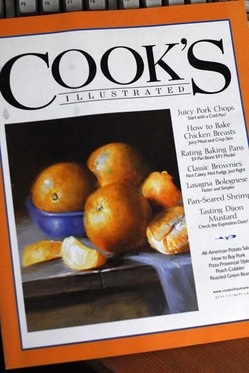 Author’s note: There is actually a point to this post other than a poorly written rambling rant.
After giving this another thought, nope. This is a poorly written rambling rant without a point.
Quite a few years ago now, maybe 7, I received my first copy of Cook’s Illustrated Magazine. I signed myself up for a few years, was feeling full of myself because we’d bought our first home a year before. Life was going to be grand. Aww, I remember it fondly, one of my first issues and it was spring time, a grilling issue and it was all mine.

I sat down quietly in my chair, usually reserved for watching tv and vice versa. I knew the author was going to pull for the propane grill, I was ready. But what I wasn’t ready for was the statement that we should stop using our charcoal fired pits because the lid imparts a bitter fllavor. I would have fired my writer for that one, and kicked them.
The months rolled on and my sheer hate for the rag continued on its merry way. I still smile when reminiscing about the time the kitchen staff was clearly befudled when their cook’s knife wasn’t slicing large roasts very well and had to find an answer! Um, a slicer? A long, skinny, sharp thingy? Or when the editor thought we needed a review of kitchen scrubbies, sigh. And don’t forget their attempts at finding a way to cook chops, roasts and birds so they’re juicy and tender. How did James Beard ever do without these fine folks reinventing butter, frying and green beans.
I let my subscription go and didn’t think much about it. Every year or so they send out a free copy attempting to get me back and I usually toss it without even opening the wrappy. Until today, just now. This is a standard free copy issue, an issue that’s put together their best of the best! Here! Look at us now baby! Pathetic at its best, I want to cry.
As I open it up I get to peruse letters from readers. Egads people are you really this stupid? Personally I think they’re making it up. How to brown meat? Are shallots worth the effort? Boiling water times and one about elimnating gas from beans? I see something missing, what’s the difference between a pot and a pan?
The heading Quick Tips caused me to not look and turn the pages until it was gone, quickly. Solving the Problem of Baked Chicken Breasts was the title of the first article. Is it 1972 or something? Let me guess, jack the heat up high, rub with some kind of fat and don’t over-cook. Yup, pretty much what they figured out. How to Pan-Sear Shrimp or should read, How to Repeatedly Bang my Head on the Wall or some such. Oh here’s one, American Potato Salad. Yeah, it’s 1972 alright, I can tell for sure now. Quiddit !!!
It was when I got to A Guide to Buying Fresh Pork that I had to stop, “Oh this ought to be rich.” The page was filled with little pictures of pork cuts and words about each one. One of the helpful little lines said, BEST WAY TO COOK: ROAST. Great, thanks for that, very informative. At this point I decided that I should see what they say about my favorite cut, the Sirloin Roast! FLAVOR: NO STARS, BEST WAY TO COOK:Not Recommended.
The only rational thing I could think for about 10 minutes was, “You fucking idiots! No wait, you fuuucking idiots. There, that’s better.” Actually, am still thinking that. Listen up people, it’s 2008 and it looks as though the world still has some morons mucking about in our society. Please, take the words that you hear written or othewise with a little grain of salt. These people repeatedly put out mundane, wrong, stupid information and opinions. This person said the sirloin was difficult to carve? That’s probably because they didn’t know to use a godamned knife.
Biggles