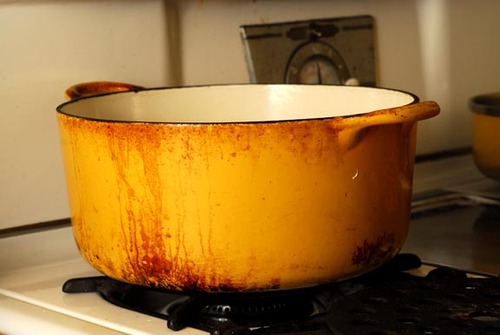 If I had to take 1 piece to cook with out of my kitchen, it’d probably be this one. Soups, stews, burgers, roast chicken, gumbo, beans, for pasta, bacon and even have done pancakes in it. Deep fry, shallow fry or pan fry, it’s good to go. Simmer some greens? Steam some veggies if you prefer, it can do it.
If you enjoy cooking and have been at it just a little while, you have one. If not, you know you want one and will have it some day. They’re that good. I was lucky, I found this one at a local thrift store for 10 dollars about 16 years ago. I figure it’s about 40 + years old, Descoware (Danish) it says on the bottom. I loves it.
The same day I bought this one, I bought a smaller one, it had chips knocked out of the finish on the inside. Who cares, it was 7 dollars! At the time, I would wash and put the pot on the stove to warm over a flame to dry it off. I noticed that if it got too hot, the enamel would pop off like popping corns. Pop! Okay, so don’t do that. Don’t dry these old things over heat, not a good thing. But time passes and we forget such wisdom.
Until 2 days ago. Had planned on making some onions translucent and warmed some oil in the bottom of the pan. I saw something shiny in the other room and forgot about it for a few minutes, not long. But enough time for the oil to over-heat and cause a chip to fly free from the bottom of the pan. 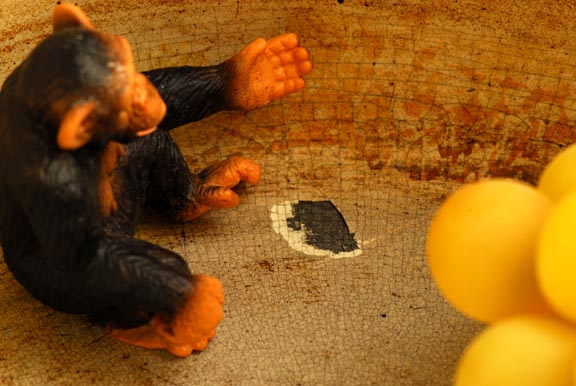 Click on and check out the picture, it’s really cool how the cracking and crazing has formed over the years. Especially where the chip came off, check that out! Spiffnoid, eh?
Made me sad, but it’s not the end of the world. The ol’ Danish Oven will function pretty much as it did. Just no storing food in it like I did before. Be wary of highly acidic food, probably not a good idea. But this piece will live on for another however many years. Or until I chip a tooth on an unseen bit of enamel.
Cheers!