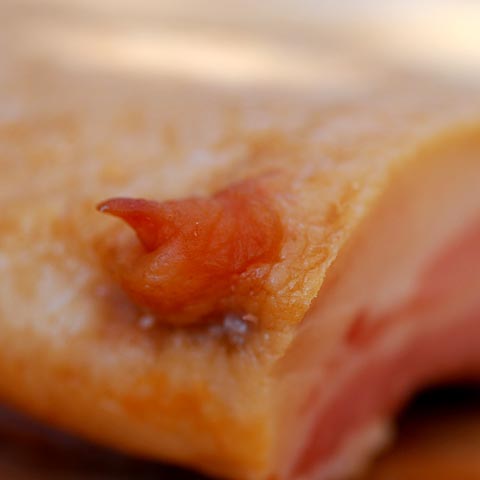 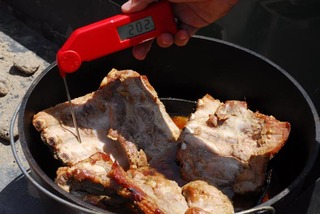 Dutch Oven Gatherings or D.O.G.’s are nothing new, only to me and the rest of us city dwellers. Chilebrown of Mad Meat Genius directly introduced me to the art a few years ago. Basically, you cook your food in a cast iron dutch oven that has feet and a special lid that will accept charcoal briquettes. This way, no matter where you are or where you go, you can have a world-class meal. Cool, eh?
But what happens when your skill set is no longer tested, your mettle isn’t put to the trial? That’s right, you begin down the road of Competition. And that’s just what CB, Abram & Larry (not included in this set) have done, they’ve trundled off to the big time of Dutch Oven Competitions. This is no small feat, you’re competing against people who could very well have done this their entire life! And a hundred or more competitors? It’s a vast sea of flurry for sure.
But you know what? Even after only a few good, heavy competitions these guys, The Meat Men are taking 2nd place. I’m impressed, a lot.
A few weeks ago CB emailed me and had been conversing with Abram, they agreed that I should host a Dutch Oven Gathering Practice Competition at Meathenge Labs. My first reaction was, well … YEAH !!!
Last Saturday was the day and I invited a few local bloggers to attend. I figured The Meat Men could do their thing, we could fire up my smoker, grill and quaff a few Cold Ones and have our own sit-down fest.
It was better than expected, everyone showed up when they said. The attending Meat Men got to work and I worked my station at the smoker. All were fed huge amounts of everything, joined by smiles and cold refreshing beverages.
CB cooked off his yeasted bread, Abram made a stellar Hawaiian Pork Rib dinner and I served up smoked chicken, bacon and a tri-tip. Pam of Zoomie Station provided homemade apple turnovers along with lamb burger sliders. Cookiecrumb of I’m Mad and I eat, Cranky of Pluto Demoted provided fresh oranges, tater salad and some other things I cannot remember. Mostly because it was 4 days ago and too many wonderful beverages in between. Tee hee.
After all was said and done not only did we really enjoy ourselves, but The Meat Men made their food under their time limit of 3 hours. Not bad, eh?
If you’re interested to see the rest of the story, go here and survey!
xo, Biggles
ps – Toponia of Fatted Calf gifted me the idea of using the term, Girl Bacon. Why? Because CB’s slab bacon had teats!

9 thoughts on “A Dutch Oven Gathering and Girl Bacon”