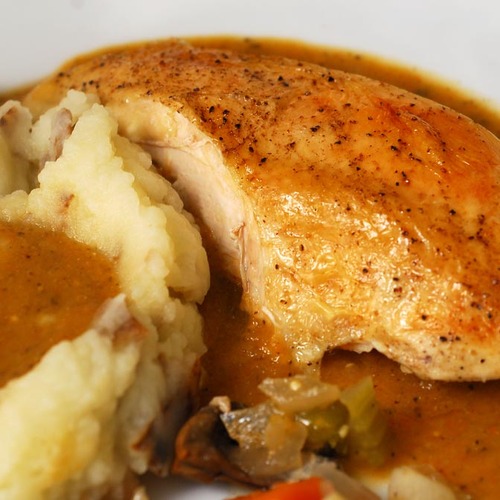 I wasn’t quite sure if I was going to post this or not, but since the images came out and I did a few things differently this time I thought I would offer it up.
I’ve been wanting to do a whole chicken in the crock-pot since I did the pork, yesterday was the day. I called it Eyeball Chicken because I opened the fridge and looked for, then grabbed stuff. No measuring, used my eyeball for portion control. I did use a lot of the ingredients and portions from my Crock-pot pork shoulder taco heaven – Or, I did it, I did it, I did it !!!
As previously stated, ya can’t just dump stuff in to the pot and walk away, you must do some extra things to bring everything up. Meaning, after cooking for 3 or 4 hours, the chicken was not brown or appealing to say the least. I jacked my oven up to 550, installed the bird to a cookie sheet with a cooling rack, popped it in the oven for 15 minutes, worked like a charm.
Before you prep anything, put your cup of broth or beer in the pot and jack the heat, high or low.
Whole chicken – washed dried and trussed – rub with favorite rub – s&p, granulated onion, dried parsely and ground celery seed, whatever. 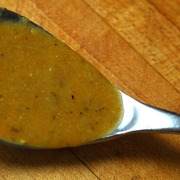 liquid – 1 cuppa – add to pot, turn on
carrots – peeled & sliced
celery – peeled a bit and sliced
onion – mine was big so didn’t add it all
mushrooms – sliced a few times – way less than bite size
garlic – as much as you want, smooshed then sliced once
tomatillos – brown in broiler
I realize my choice of ingredients here pretty basic, except maybe for the tomatillos. Am still attempting to get my process down, then I can move on. Ya dork.
Install veggies to warming pot, lay trussed and rubbed chicky over the top. Install lid and walk away until everything is done, mine was on high for nearly 3.5 to 4 hours.
Sigh, looks like your typical crock-pot meal, the chicken was really pale and the broth was thin. What to do?
The chicken needed color, decided not to use the propane torch, figured I’d burn the rub. So, I jacked my oven’s temp to 550, rack in the middle. I needed it hot and fast as the chicken was already done, had to get the heat everywhere at once. Used a cookie sheet with a steel cooking rack, installed chicken to oven for 15 minutes. 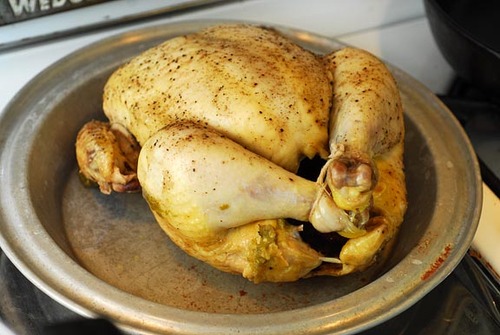 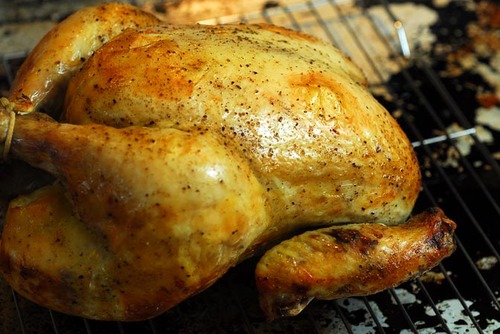 Separate the veggies from the broth, reduce broth by 1/2, added a little salt. I could have used a thickener to bring it to a gravy, but there were quite a bit of veggies left, quite a bit. Dumped half the veggie supply in to the broth and used the motorboat to whiz everything to the consistency you see in the spoon above. While it did have more of a vegetable taste to it, there was plenty of broth and chicken fat to bring it around nicely.

I found with a little bit of work before and after can really offer up some great results. It was just me and Z for dinner, but nearly the entire bird was gone in 30 minutes, it was that good. I know what you’re thinking punk. “Oh Biggles, if I’m going to brown the meat or go to that much trouble at the end, I might as well just use the oven or stove-top.” I get that, I do. But you see, what you’re doing is breaking up all the work so you can go do something else for the rest of the day. And, if you’re late coming back, or forget to come home due to beers, it’s no big deal.
xo, Biggles