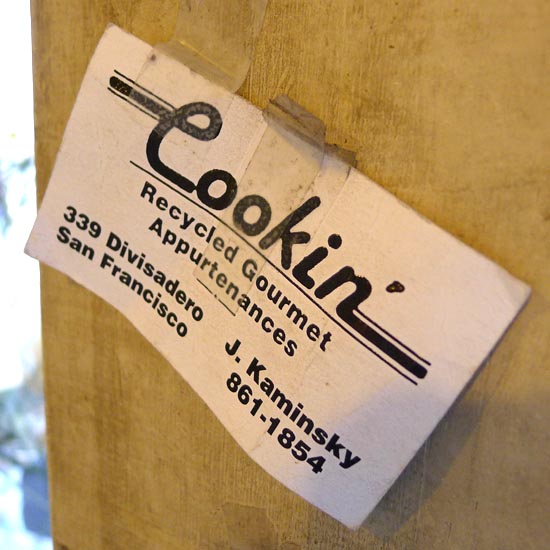 Back in March when Meathenge Labs hosted a small, impromptu Dutch Oven Gathering a used cookware store in San Francisco was talked about.  Me being the backwoods hillbilly that I am hadn’t heard of it. I was promised that some day in the future we’d all go and have some fun.  It took more than a few months, but we finally did it! 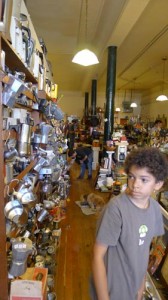 Tiny E and I headed out from sleepy little Richmond with hope in our hearts and a whopping 10 dollars in our pockets. Was fine though, it was more about the adventure than coming back with a truckload of jewels, goblets and fry pans.  We found and parked at Kajsa’s & Cameron’s apartment with fair ease. We had to hike in about 9 million miles, but such is the burden of living in a large city with very little available parking.

Cookin’ is housed in a bitchen old building with rough wooden floors directly located on Divisadero. While it’s organized to the teeth, it’s an exceptionally packed solid type of organization.  Floor to ceiling type of packed.  Floor to ceiling with probably more than 80 years worth of kick ass cookware and related implements. 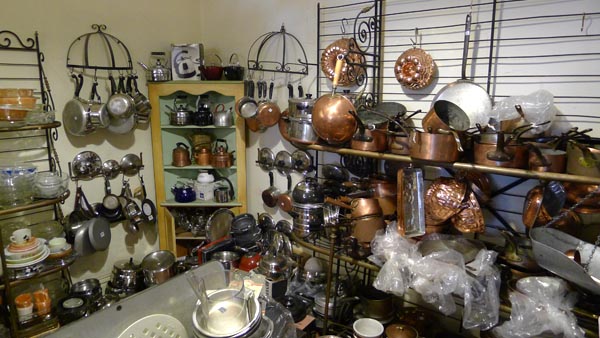 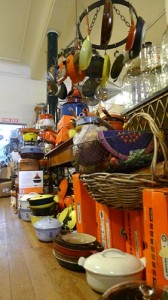 I noticed it was going to take probably 2 to 3 runs through the store before my eyeballs and brain were able to make any sense of what was and what it might be. To discern if there was anything there that I just had to have, something I couldn’t possibly leave behind.

Nah, ol’ Biggles’ kitchen is pretty well stocked and I wasn’t able to find anything I had to have.  I was interested in a few of the old cake holder container rigs.  You know the ones, right?  Put cake on platter, then a nifty cover goes over said cake to keep it fresh for a day or two? 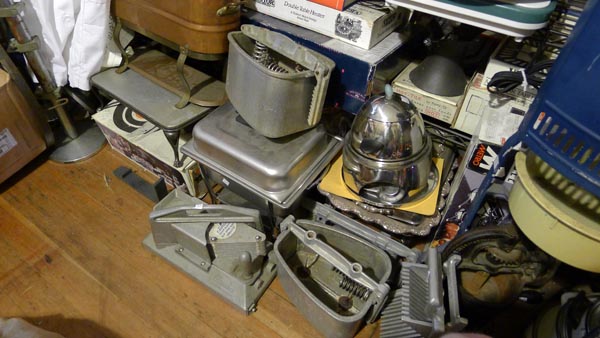 The owner had half dozen or so, but they were priced way, way, way out of my price range. We’re talking a thrift store find for 8 to 15 dollars and she was asking 40 dollars and more.  Not interested. In fact, the entire store is priced at maybe solid ebay prices for collector pieces.  I looked, but wasn’t able to find one deal to be had. She knew what she had and priced it accordingly. That’s fine, it’s not as though you can walk down the street to the next recycled cookware store and buy the same thing for less. She’s got a corner on the market and is acutely aware of it. 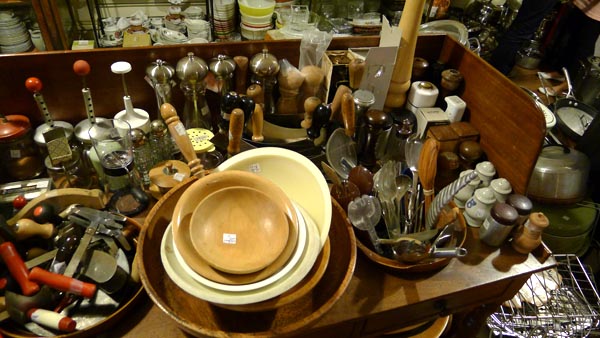 All in all we greatly enjoyed the afternoon out and I would certainly stop by again in the future.  If you truly need something soon, then by all means stop by and get it!  It just has to be in there, somewhere. But if you’re not crazy hot to have it right now? Give yourself a breather and keep your eyes peeled at local thrift stores, garage sales and deals on the internets. That and gifts from friends and family is where most of my gear came from.