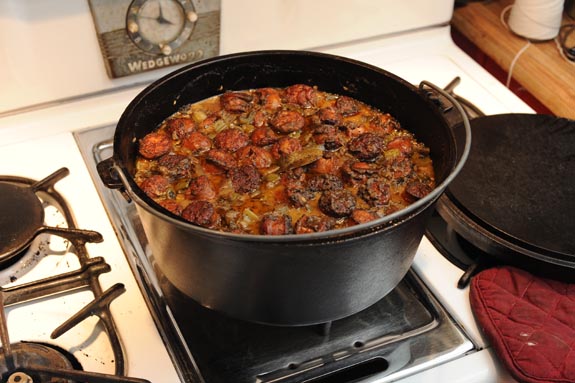 Have you ever spent so much time watching cooking & food shows on tv that you begin to salivate, daydream, then move along to actually getting off your ass to cook something similar? I wanted something gumbohey, something with bold flavors, something I could cook for a Tuesday evening.  Chuck Taggart’s Simple Chicken Gumbo was a clear choice.  I used it once before years ago, what could possibly go wrong?

Me.  I spent an evening, then the the morning after making my lists.  I wanted to make his Creole Seasoning too, wanted it oh so special. I got the veggies all neatly diced, got the meats all browned and set aside.  Heated up the cast iron French oven and made a badass roux, all dark and smoky. Dumped in the veggies for the 4 minute sweating, stirred and scraped. Then fell stupid quiet, jaw on ground.  The realization hit me, while looking at the nearly full pot of veggies only, “It’s not all going to fit”.

Dumbass.  Duh, 4 quarts of liquid, huge amounts of veggies and 4+ pounds of meat going in to a 5 quart pot? Dumbass.  I was all ready to put everything together and get it in to the oven!  Nope. And you know what?  I had no other oven-ready pot to put it in. Dumbass.

Then I remembered I have several shelves of cookware in the garage, a-way out in the back, that might contain something I could use.  I dragged in my camp dutch oven, the one with the 3 legs. It didn’t sit so well on the stove, all cattywompus.  But it was good enough to get everything up to temperature, then get it in to the oven, on the pizza stone. Good thing for the stone, eh? Without that I would have had another problem with those legs sitting all funky.

Instead of 1 hour, I did 1.5 hours at 375.  And even after my goof, dinner came out wonderful and on time. Remember, simply reading a recipe is completely different than actually paying attention to what you require to get the job done.  Dumbass.

2 thoughts on “Reading versus Comprehension”