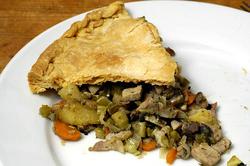 Just when you thought it was safe to come out, just when you thought the Arista Panzanese was done and out the door. You couldn’t be more wrong. Last night there was a happy chunk of the special pork roast left over. Eric won’t eat leftovers, but here at MeatHenge Labs we have no problems with such things.
Mama said it was time for MEAT PIE !!! I was okay with that, especially since she is the Pie Crust Queen. 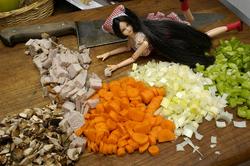 If you take a look you can see Madamoiselle Crepienette snagging a hunk of roast, she needs a ‘pankin’. Naughty ol’ thing.
The words Meat Pie really bring up nothing but warm rich love. The deep richness of the filling, the flaky butter crust … the second slice. But since you have to make a decent pie crust, most people shy way from the Meat Pie.
If this is you, stop it. Do a search on the internet, do some research at the library. Go to the store and buy enough flour, salt & butter to make a dozen pie crusts. Get to work. It’ll open your world of meaty and fruity delights. So many wonderful things to eat include a good pie crust. Practice and get it right, your reward is the greatest ever.
That being said, the filling for meat pies vary quite a bit. But you’ll need to keep it rich and savory. Dice the bits small, you’ll want meat, mushrooms, celery, onions, celery, carrots, parsely and boiled/peeled potatoes. 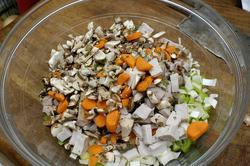 Put all your ingredients in to one bowl and mix around a bit. You’ll want some FRESH herbs, maybe some rosemary & thyme. I rendered some pancetta for this as well, something to give it some ZING. Salt & pepper to taste, we didn’t add salt because of the pancetta. We chose not to add liquid or gravy at this point thinking the uncooked vegies would have enough moisture, don’t do that. Make yourself up some gravy & or sauce to make it juicy. 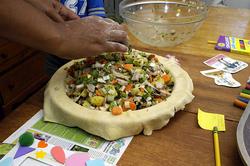 Roll out your dough and do up your pie plate bottom portion. Fill that pie shell up good, make it bulge. Meat bulges are good, eh? 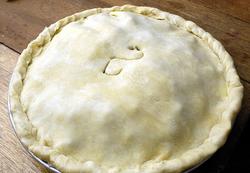 Roll out yer top, crimp in and cut a slit in the top fer steam to come out. 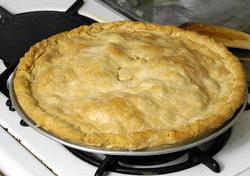 Go in oven, pull out when golden brown.

Let rest for maybe 15 minutes.
Even without the juicy gravy, the meat pie was tasty spot on. The flaky buttery crust was right on as well. Cutting the ingredients in to small chunks really makes an easy to eat meaty treat. We’ll be doing this more often, especially this coming winter.
Xo Xo