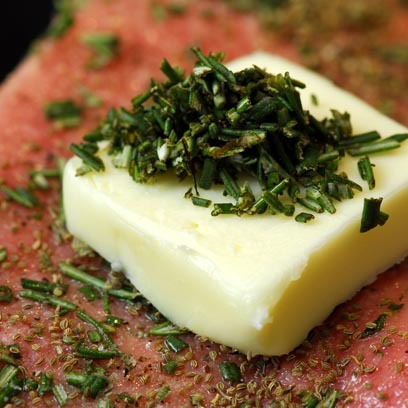 You know the ones, they’re shaped like a triangle log. Fat on one lengthy side and the rest looks pretty lean? Was looking for a tri-tip or sirloin, but no luck. It’s the holidays for crissakes, why would they have those cuts? Sigh.
It was 4:30 in the afternoon on Wednesday, I had a preheated oven, could I get this on the table in time?

Der.
This triangle meat wasn’t standing the way I wanted it. That nice slab of fat was on the side, not good. I wanted it on top so it would render and juicify the roast underneath. But how was I going to get it to stand on its tippy toe? Cut a potato, play with the potato and don’t laugh too hard at me. 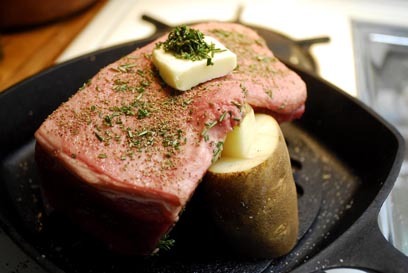 Looks pretty dumb/silly if you ask me. But it worked really well and I got what I wanted.
Rub with extra virgin, celery seed, salt & pepper the sucker. Mince up some fresh rosemary and put all over. Slice pat of butter, mound with more rosemary. Install to preheated 350 degree oven in cast iron pan with trivet until internal temp is about 130 (rarish). Let rest 10 minutes and you gets this. 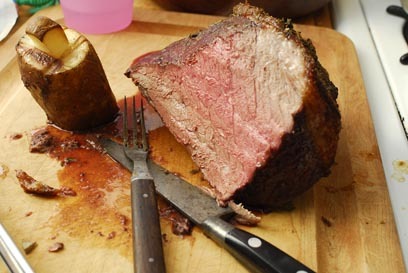 The flavors were rich & beefy with some yummy salty with a all around action of fresh rosemary. A final squeeze of fresh lemon would have been a nice addition. The texture went along the lines of something toothy, but never ‘chewy’. It’s easy, somewhat quick and never disapoints. Love.
xo, Biggles

13 thoughts on “Bottom Round Beef Roast with Butter on Top”