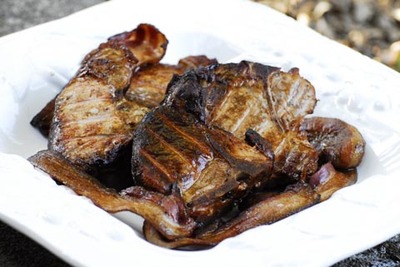 This post isn’t for you people who are already hip to the love of an old, well used smoker. But for those of you who may feel they need the new stuff, the bells and even a few whistles. As with many crafts, it’s about the person wielding the brush, not the brush itself.
Yeah well, before we left for Calistoga Jeffrey said a friend had given him an old smoker that someone had tossed out. It looked complete, but old, rusty and kinda funky. He sent me a picture and it looked serviceable. While I have used and owned a few of those bullet shaped smokers, I’d never actually used one with no visible air vents or access door to the fire. 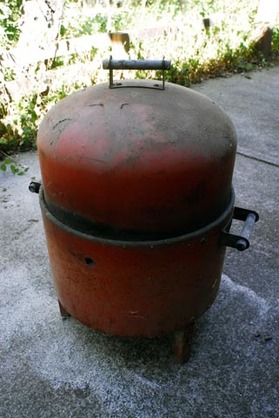 The day arrived and I showed up with a load of pork chops and a pork roast, just to see what she could do. The darned thing weighed a ton for such a small rig, 16 gauge steel? The lid sits inside the main tube, pretty snug too. One rack sits up high, a charcoal pan lays below, had a 1″ hole in the bottom, at the center. Ash pan sits on the ground underneath. Sure there’s a little hole, about the size of a finger in the side, but not one adjustable air vent, who knew? I sure as hell didn’t.
A full load of mesquite charcoal, gray and all glowy was installed in to Ol’ Orangy. Remember, fire is a living, breathing being and needs to be tended to. Especially when your cooking in an unfamiliar pit. Get to know your fire, foo. And you know what? Fire is hot, and this one was no exception, brother. This little smoker was really putting out some serious heat. With the lid off it was a high-output furnace from gosh. With the lid on? A little bit slower.
Time to let the fire mellow, burn down so to speak. With the lid removed, the grate went on for a good cleaning (read here: burn the crap out of it). Time marches on. The charcoal had burned down and the lid went back on. Ya know, that little 1″ hole in the charcoal pan works really well. The wind whistled through, keeping the wood closest nice and hot. Then, from the center back to the outer edges, the charcoal burned nice and slow, perfection.
Maybe 15 minutes or so it’d cooled down and the meat went on. 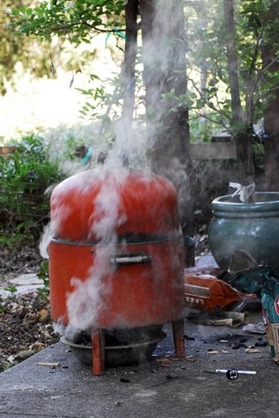 Normally, one doesn’t want to open up the smoker frequently, just let the damned thing do its job. But I was unfamiliar with the rig and the meat wasn’t huge enough to just let it sit all afternoon. Peek, peek, peek! After all was cooked and plated, the fire I had decided to cook on was still a little too fresh for some low and slow action. But not a bad haul for the first run, not at all.
To sum it all up, this little torpedo does an excellent job, I’m really impressed with it. I would be proud to have one of these in my arsenal. While fire access isn’t the best, it’s really efficient and doesn’t need much reloading, unless you were doing a brisket er butt. Besides, the grate is really easy to remove hot, just make sure your leather gloves don’t have holes (don’t ask me how I know this). The only downside I could find in the design is where the ashes wind up, pretty much on the ground. Any decent gust will send them out and about, kinda like an old weber kettle.
The next time you see an old smoker laying by the side of the road, tucked under some weeds or at a garage sale, grab it! It could very well provide you with some juicy morsels and save you some cash.
Biggles