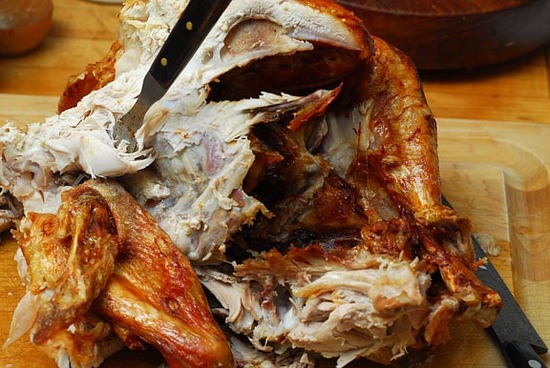 Earlier this year I received an email from a large ad agency, a man wanted to know if I was interested in reviewing Butterball’s new table-top deep fryer for turkeys. Hmm, free fryer and it’s large enough for a turkey? Duh. We’d chatted via email a few times for over a year, wasn’t just some nameless droid in a cubicle somewheres, actually had a personality and seemed to get Meathenge. Butterball’s version of the Masterbilt turkey fryer wasn’t out yet, was going to have to wait a few months, no big deal. 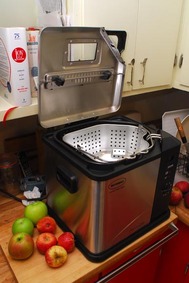 It finally arrived! Pretty darn large box, pretty darn large fryer. I opened it up and peered in. I looked, crooked muh hillbilly neck a bit and exclaimed, “Dang, no turkey is going to fit in that basket!” You see, I had a 5.2 lb chicken in the fridge and compared sizes, using just one eye ball. No way. I pulled and checked the instructions, up to about a 12 lb turkey, maybe 14. 11-12 lb was optimum, and it showed the little bird laying inside the basket. I wasn’t seeing it in reality though.
Those of you who know, finding a turkey under 12 pounds is nigh impossible in the off season, this being not Thanksgiving. Birds that small are a special order and even then youse takes yer chances. So, over the next few weeks I stalked the local mega marts, searching for my tiny bird. I finally found one, just under 12 pounds. Set to the fridge to thaw for the next week.
I could have gone fancy here with a brine, herbs, bacon stuffing or whatever, but I wanted to do a test run and see what the scoop was. Once that’s taken care of, then one can move on to some fancy steppin’. I got a real shocker on my next stop to my local grocery, 10 dollars a gallon for inexpensive cooking oil! And this cooker requires a full tub of oil, that’s 2 gallons to deep fry a turkey. While that is a lot of oil, that’s about 3 gallons less than the outdoor propane powered situations. Of course they’ll do a 14 pounder with ease, I’m still not convinced this table-top model will do a 12. I had my turkey, I had 20 dollars worth of cooking oil and I had the time, it was deep fry turkey day!
Translation: It was Thursday night (a work night), after a week in the fridge it still wasn’t thawed, it was dark out and I was having second thoughts about having 2 gallons of 375 degree oil on my counter and nobody around to call 911 for me. I’d just got over putting a burning ember hole in my left foot and the thought of deep frying myself wasn’t making me feel very good. So, I called my sister and brother inlaw over.
30 minutes later they were here, the oil was at 375, the turkey was thawed (soaked it in cool tap water), then thoroughly dried inside and out. It was time. I’ve deep fried things quite a few times and know now that one wants to lower the food slowly, s-l-o-w-l-y. With the instructions in my left hand, I lowered the turkey with my right, set the timer for 48 minutes and closed the lid. 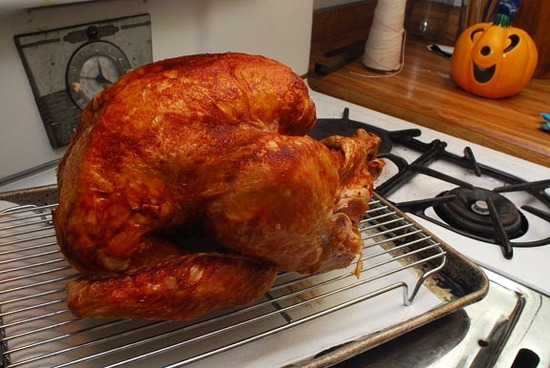 The fryer has a filtered lid, so while there was quite a bit of steam, the smell of cooking oil was really minimal. After the 48 minutes went by, this is what I got. Um, not a bad looking bird, eh?
As expected it was moist, juicy from one side to the other. The breast meat was a little over done, would cut the cooking time down to 40 minutes next time. I rarely have over done breast meat, so I was kinda shocked at that. Still more than perfectly edible and it was consumed right there in the kitchen.
One can probably guess the bird fit just fine in the basket, I would not recommend anything over 12 pounds though. It’d be stuffed too tightly in the basket and would not allow the oil to completely cover the bird, and this is what you want for the best possible golden brown results. The machine seems to be built well enough, everything removes easily for cleaning. It’s got a drain pipe for the oil and it’s large enough so you don’t have to wait 20 minutes for all the oil, nor does it get clogged with bits. I left the machine on my counter for 2 days with the lid closed to see how smelly it might be and I have to say it was nearly undetectable. I did wake up the next morning with the Deep Fried Kitchen Smell, but it was easily dissipated with a few hours of open doors. No oil spray on cabinets, thank goodness. A cool feature I noticed while fumbling with the power cord, it’s held on to the unit with magnets. Which means if something happens, all you have to do is give it a gentle whack and the power is separated from the unit. As for clean-up, the oil tub and basket fit in my dishwasher with the top rack removed. All in all, I give this fryer two greasy thumbs up.
I did notice the box and instructions boasted that you could also use this fry for steaming and boiling food. I haven’t tried it, but I do know something about table-top fryers, once you use them as intended, they’re a dedicated machine. Getting that fried oil smell out is near impossible and any steamed or boiled food would have a fried oil flavor, so I wouldn’t actually plan on using it as such. You can try of course, but don’t be surprised when your taters come out tasting like yer oil. 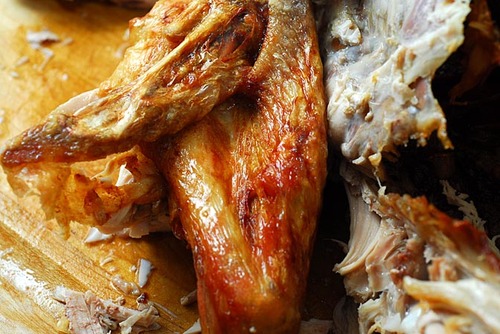 All that said and done, I’m not hip to the deep fried turkey thing. 20 dollars worth of oil, gone. While the clean-up was “easy”, it’s still a pain in the ass. And now I have 2 gallons of waste oil I have to drive down and dispose of properly at our local hazmat dumping site. No waste cooking oil can be put in our recycling bins. But Biggles, it was oh so tasty, isn’t it worth it? Um, I like my turkey roasted in the oven, it’s a personal thing.
If deep frying a turkey is something you want to try or something you enjoy regularly, this rig will do it and with far less oil than the larger outdoor method. It’s safer too! No 911 call was made.
xo, Biggles
Author’s note a day later: I understand I can filter and reuse the oil. The issue is that I wouldn’t get around to using it for 3+ years. Annnd, just because I reuse the oil 2, 3, 4 times doesn’t mean I still don’t have to have it properly disposed of. Cheers!

19 thoughts on “Butterball’s Table-Top Turkey Deep Fryer, made by Masterbilt – A Review”