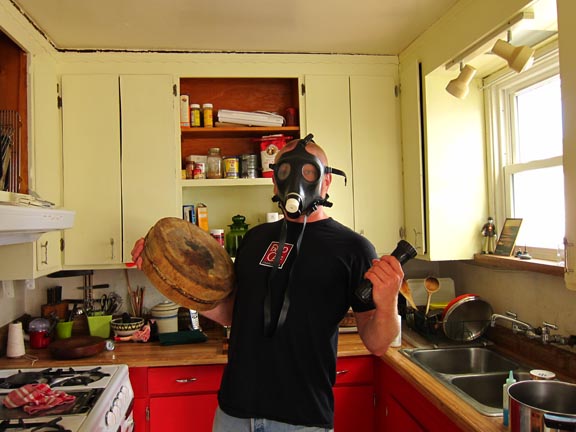 Z and I awoke this morning, I was the early bird at 6am. Our plans for later in the morning were to head out to the mall to find a jacket that fit the boy proper like. We both understood we had to get this done, but also knew there was a city wide garage sale going on a few miles to the south of us.
Sheet fire! GARAGE SALE HO !!!!
Sure the addresses were published, but we only decided to go that minute. Just drive around, up and down. We found a nice group of older folks living in a home selling grilled dogs, popcorn and drinks for a buck fifty. A block down and around, some young hipster selling off a 78 record player console and a 60 year old camera that looked clean. But some other hipster grabbed it, was totally in to it. I wondered if they knew it didn’t have a lightmeter.
Just down the road we landed on Richmond street, a pretty good little thoroughfare. A hot chick and her dude had a dufflebag of VHS pr0n including a gas mask. I told her point blank that my brother inlaw would be interested in this, right here. She said, “Whatever floats your boat.” Then giggled, flushed and got in to someone else’s business.
Z and I headed out and around the corner, got in touch with my sister and let her know the scoop. Brother inlaw called me back and asked for an accurate locale. Within a few minutes, this poor hotchick was approached by my sister and husband asking if a tall, Norwegian looking, red headed and bearded axe murderer looking guy was here checking out her pr0n and gas mask. “Uh, yeah. It’s over there.” Keep in mind, brother inlaw is bigger than me. It was all a pretty fun encounter and will probably be told a few times over the next day or two.
A good time was had by all and I ended up at the end of the day with a gas mask (found on top of a Russ Meyer movie), a 60 year old flashlight, an abused chopping block along with a few LP’s (Barry White) for about 6 dollars. OH yeah, and we totally scored a dozen doughnut holes from another hotchick that was selling a few macrobiotic cookbooks and trucker hats made from hemp.
Garage sales rule.
xo, Biggles