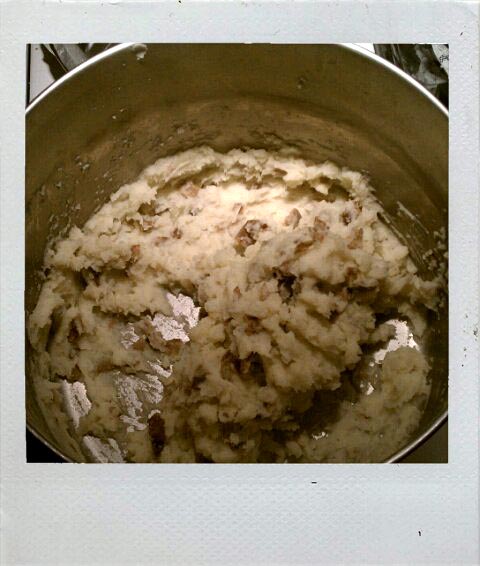 At first I thought it was just me. But then after more than a few months and an observation, I’m convinced it’s a conspiracy. I have doubts about my personal abilities, surely.  But brother, or sister, if there’s one thing I can do is cook. And one of the dishes I do exceptionally well, is a good serving of creamy mashed potatoes.

Starting more than a few months ago, and even up until last night, I’ve been failing at cooking potatoes. What I mean by this is that both baking them and boiling them to mash isn’t working like it used to.  400 degrees for an hour on 1 medium potato is rendering me a mostly uncooked potato.  A large rapidly boiling pot of whole medium potatoes for 45 minutes is rendering me uncooked potatoes.  Sure, poke them with a fork and it glides in and out without resistance. But when it comes time to open the suckers up, when it comes time to mash them?  Hard as a rock.  So far, 9 out of 10 times is a tear jerking failure.

For the first dozen times, I thought that maybe I was just off my game. Maybe I set the the timer wrong, maybe the oven was off, maybe I’m just getting too old to boil a potato. I’ve even gone so far to try russets from different stores, ones in bags, tubers hand picked from the bin. Nothing rendered me success in the arena of baking or boiling potatoes.

It wasn’t until last night that I remembered a recent episode of Top Chef, can’t remember which one exactly.  A chef went home because her gratin wasn’t cooked.  She served raw potatoes. And at her level, this should never have happened.  Even if she had chosen to cook them on the day of and not the day before. Making a gratin is Cooking 101 for anyone. How could this be? I’m not the only one cooking and serving raw potatoes!

I am now solidly convinced that there is a potato conspiracy going on here in these United States. From large to small, from bulk to a la carte, we have a problem. It’s not going away, in fact it could be spreading across our great nation.  Is it international? I don’t know yet, but I can tell you for sure, I’m now doing research in this field. This needs to be unearthed, we need to locate the root of the problem and halt this Great Potato Conspiracy of 2011 at any and all costs!